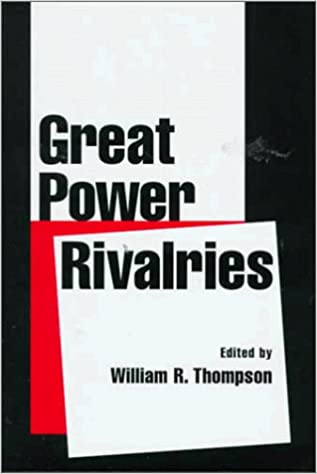 Rivalries are one of the most important and most misunderstood elements in world politics. While studies of wars, crises, and disputes are common in the international arena, scholars have been slow to appreciate that these violent events tend to be the outcomes of protracted conflict relationships. Rather than focus solely on the dramatic outbursts of interstate feuds, studies are beginning to examine their antecedents and view rivalries as ongoing processes.

Great Power Rivalries edited by William R. Thompson concentrates on major interstate rivalries of the past 500 years, ranging from that between Britain and France to the cold-war rivalry of the United States and the Soviet Union. In thirteen case studies, the contributors focus on strategic competition, paying particular attention to the transition from commercial to strategic rivalry. Each case study, in conjunction with other arguments, answers a common set of questions pertaining to the rivalry's life cycle, stakes, escalatory dynamics, priority in the foreign policy agendas of its decision-makers, and intersections with other rivalries.

The studies are presented in three groups: rivalries between land powers with continental orientations; leading maritime powers and challengers from within their ranks; and leading maritime powers and challengers from outside the maritime ranks. The essays are biased toward leading sea powers and their challengers for political and economic predominance because these powers have been so important in the evolution of world politics, as have their rivalries, which have formed a fundamental conflict armature for the international system.

While world politics is currently in a phase of unusually limited great power rivalry in the aftermath of the cold war, there is no guarantee that this relative peace will become a permanent feature of international relations. Regardless of the nature of the great power rivalries, there are a number of continuing interstate rivalries among non-powers that could challenge international conflict resolution techniques and disrupt world political and economic systems. The Evolution of Great Power Rivalries makes significant strides in illuminating the rivalry process-an understanding crucial to managing conflict in a violent world.


William R. Thompson is a professor of political science at Indiana University in Bloomington. Thompson is a coauthor of Leading Sectors and World Powers: The Coevolution of Global Economics and Politics and The Great Powers of Global Struggle, 1490–1990 and the author of On Global War: Historical-Structural Approaches to War Politics.