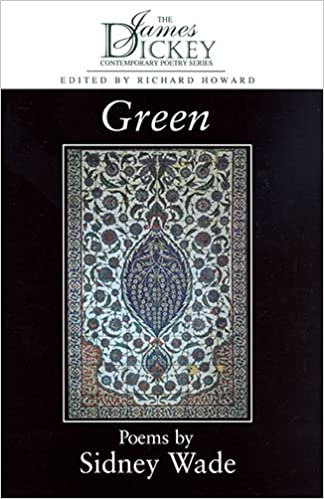 In this new collection of poetry, Sidney Wade includes poems written in many forms that touch on a variety of subjects, all informed by a singular voice and an intensely vibrant language. The volume is set primarily in Istanbul and illuminates physical and metaphysical borders—the edges, everywhere, of water and land; of vanished empires left standing, in architectural form, in the present; of two continents, Europe and Asia; of the broader Western and Eastern cultures and the civilizations that inhabit them. The compelling intricacy of the tangled borders of history and myth, culture and conquest is alluring in a physical, almost erotic sense.

The landscape of these poems ranges from the shores of the Orient to include a uniquely metaphysical American Midwest, recognizable territory to readers of Wade's first collection, Empty Sleeves, as well as the classical underworld, Romanesque basilicas in Rome, the often rocky terrain of the territory of marriage, and the more intimate geographies of the kitchen, the cupboard, the bed, and the body. Her subjects extend from the baroque image of Byzantine artifacts to the semiotic resonance of a pair of steeply angled spike-heeled pumps. The book begins in bliss and ends on the brink, in a journey that charts the intricacies of the all-too-human, bewildered heart.

Sidney Wade teaches in the Department of English at the University of Florida. The author of Empty Sleeves, Wade lives in Gainesville with her husband, the novelist Padgett Powell, and their daughters, Amanda and Elena.

"Sidney Wade's very fine new book moves considerably beyond her earlier one in its unusually subtle display of formal variation, in its dialogue with classical antiquity, and in a powerful, contemplative mode in which her poetry 'peers, ever hopeful, / at the roiling sea of contradictions' that a mature awareness of reality presents it with."—John Hollander

"Sidney Wade's marvelous ear and her alert sense of poetic occasion combine here to produce these adventurous poems, full of treasures for the fortunate reader."—Cynthia Zarin