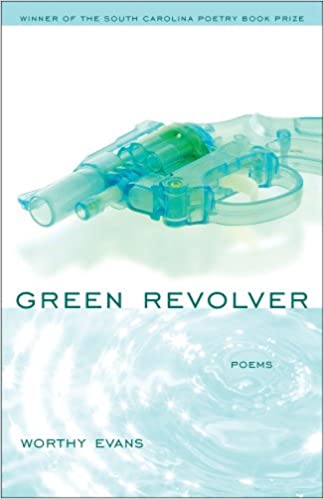 Selected by David Baker, Green Revolver is the fifth annual winner of the South Carolina Poetry Book Prize and the first published collection by Worthy Evans. These verses resulted from a spontaneous outpouring of poems, pent up during a fourteen-year hiatus from the craft during which Evans worked as a professional reporter, writer, and editor. Much informed by the rapid-fire pace and cadence of his journalism background, Evans's narrative poems are grounded in concrete images of our shared reality and explore a range of imaginative versions of the poet as confident or frightened, loving or hateful, bold or timid, lost or profound. These poems seek a distinguishing personal truth—a sense of belonging in a world not altogether welcoming, or even that familiar, where violent impulses are as threatening as workday drudgery. In these daydreams given form, Henry Fonda wields the same authority as Henry V or Ward Cleaver. In this landscape where the familiar arches longingly toward the surreal, a cockeyed visionary might just find the right fantasy with which to escape the stultifying confinement of banal modernity, as represented by corporate office space and khaki dress slacks, army motor pools and basic training maneuvers, sprawling cityscapes and the omnipresent pestering responsibilities of adulthood in postmillennial America.

Born in Winter Park, Florida, at the same time Walt Disney World was being completed, Worthy Evans grew up in several South Carolina towns. Evans is a graduate of the College of Charleston who has served as a U.S. Army combat engineer, an award-winning local sports reporter, a copy editor for an independent scholarly publisher, and a corporate communication specialist. Whether gainfully employed or unemployed, in the bleachers or in a cubicle, Evans has remained a poet at heart, cultivating the verses found here in his first book. He lives in Columbia, South Carolina.

"This intensely original collection of poems heralds the debut of an American original. Worthy Evans uses the vernacular is ways we have never seen before. He brings a cinematic intensity to ordinary images; as if he is an alien visiting earth and reporting back in ways that make the ordinary seem extraordinary. Green Revolver is a masterpiece."—Marjory Wentworth, South Carolina Poet Laureate

"After a career of reading the work of several thousand students and several thousand poems from poets great and small, one hopes that each book he picks up will be a discovery of something new. Sometimes that hope is rewarded, as in the case of Green Revolver. Worthy Evans is a new poet, but one with a mature voice. What a pleasure it is to hear our mundane lives rendered enlightening and exciting in such a matter-of-fact tone. In Evans's accurately presented society, we everyday folk flounder into our value as human beings."—Paul Allen, author of Ground Forces

"Green Revolver impressed me with its confidence, its strangeness, its accruing sense of drama and import. . . . This poet is a shape-shifting trickster with the voice of the schmuck in the cubicle next door. He might be our savior. He might be the guy in the black robe holding the scythe. He might be both. . . . Each poem is a little narrative. Sometimes the story is a commonplace, even tedious account, and sometimes it shocks with the absolute strangeness of its familiarity. In each case the same nonjudgmental voice delivers the news—the bad news—that if we're not careful, we will go mad inside our hypernormal lives."—David Baker, poetry editor of the Kenyon Review and author of Never- Ending Bird, from the foreword