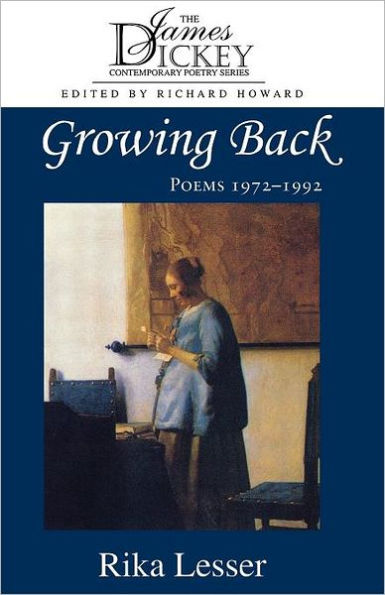 Growing Back, Rika Lesser's third collection of poetry, is a bridge that spans the poets and languages, family and friends she has made her life and its work. Written over two decades, many of the poems in this three-part collection predate those found in her acclaimed Etruscan Things and All We Need of Hell. In this latest volume, the well-known translator of Swedish and German poetry offers readers a selection that locates, embodies, and anchors the continuing achievements of her poetic work.

In the first section, "Away," Lesser writes of her long relation to Sweden, her adoptive country. In the second, "The Gifts," she records her return home. The last, "About Men," displays her preoccupation with translation—of literature, of life, of "others" she finds in need of interpretation, whether they are poets like Ekelöf and Rilke, or quite generally members of the opposite sex. Growing Back, like her other collections, reveals Lesser's poetic undertaking to be a rhythmic making of forms, in which language and content kick against the limit of lines that are most often syllabically determined.

Rika Lesser is widely known for her prize-winning translations of poetry: Guide to the Underworld by Gunnar Ekelöf, Rilke: Between Roots, and A Child Is Not a Knife: Selected Poems of Göran Sonnevi. What Became Words is her selection of poems by Claes Andersson, Finland's minister of culture. A native of Brooklyn and an alumna of Yale and Columbia Universities, she lives within walking distance of the Brooklyn Bridge.

"In the poems of Growing Back, Rika Lesser finds herself creating a personal and literary archaeology. Steely-eyed and soft-hearted, Lesser makes her back to her esthetic and emotional origins, then grows up through them in this unusual book spanning twenty years of musing, grousing, focusing, veering, and transcending."—Molly Peacock