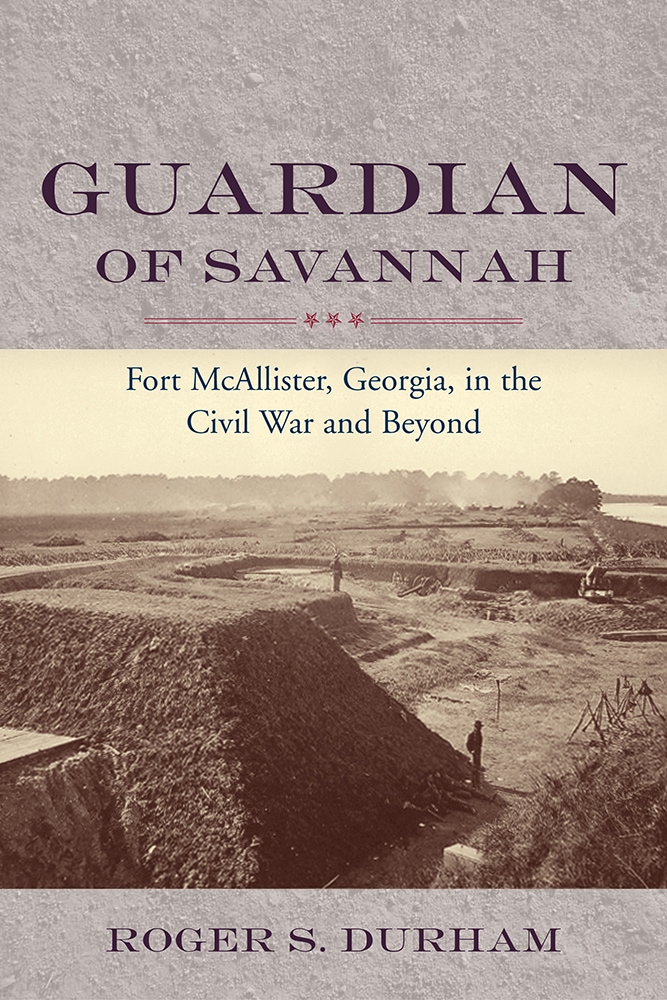 Fort Mcallister, Georgia, in the Civil War and Beyond

Built out of sand and mud and designed to serve as the southern anchor in the coastal defenses of Savannah, Georgia, Fort McAllister was constructed in June 1861 on the Great Ogeechee River, twelve miles south of the Savannah River. Roger S. Durham offers a comprehensive history of the fort's construction, strategic importance during the Civil War, and postwar restoration in this vivid account of how an earthen defense withstood not only devastating naval assaults but also the effects of time. Durham intertwines historical facts with human fates through frequent use of primary sources, letting the fort's defenders and attackers speak for themselves and bringing readers into the fiery heat of battle.

Two innovations in warfare wrought by the Civil War were the rifled cannon—which proved detrimental to the masonry construction of Fort Pulaski at the mouth of the Savannah River—and the ironclad warship, but neither could compromise the earthen parapets of Fort McAllister. Over the course of the war, McAllister's original four-gun design was augmented to include twenty-two guns, making the fort a much more difficult challenge to Union assaults. The monitor USS Montauk was twice summoned to take Fort McAllister and twice failed. In a third Union attempt, three ironclads and a supporting fleet of wooden gunboats bombarded the fort for seven hours, though the defenders suffered no casualties and the fort withstood the blasts. In all, seven unsuccessful naval attacks were made against the fort. McAllister's final threat did not come from the water but from the western reaches of the state. In December 1864 General William T. Sherman's famed March to the Sea negated the viability of coastal defenses, and Fort McAllister, like Savannah itself, fell at last.

Fort McAllister's story did not end with the war. In the 1930s the site was owned by the industrialist Henry Ford, who was instrumental in the initial preservation efforts to restore the fort as a historical monument. Ownership later passed to the International Paper Company, which in turn deeded the land to the State of Georgia. The historical site was opened to the public in 1963, on the centennial of the bombardments by the Union ironclads.

Durham's harrowing account of life and combat at Fort McAllister, and of the subsequent restoration, is augmented by twelve maps and sixty photographs—including rare images of Sherman's troops at the end of the March to the Sea and of early preservation initiatives.


Roger S. Durham is the director of the U.S. Army Heritage Museum in Carlisle Barracks, Pennsylvania. Durham is a graduate of the University of Wisconsin and Georgia Southern University. His other books include High Seas and Yankee Gunboats: A Blockade-Running Adventure from the Diary of James Dickson and Fort McAllister.

"In this exciting tale of dirt versus iron, Roger Durham provides an outstanding history of Savannah's Fort McAllister, an earthen battery that withstood numerous attacks by Union ironclads before finally succumbing to a land-based assault. Through his thoughtful interpretation of the facts and his use of defenders' narratives, Durham captures all aspects of life and duty within the walls of this coastal fortification. He also carries the story forward to present day in his discussion of the preservation efforts that have established Fort McAllister as a popular historical site. Guardian of Savannah will appeal to students and enthusiasts of Civil War, Georgia, and maritime history as well as anyone with an interest in preserving our nation's rich and complex history."—Daniel Brown, superintendent, Fort McAllister State Historic Park

"Located south of Savannah and built of sand and mud, Fort McAllister was pivotal in Confederate defiance of the Union blockade and thus a frequent target of naval attacks. Roger Durham has crafted a fascinating and thorough history of the fort's role as a proving ground for coastal defense designs and as the final obstacle in General Sherman's March to the Sea. Durham also details how Henry Ford's interest in preserving Fort McAllister set in motion the efforts that have since established the site as a historical park for interpretation and tourism."—W. Eric Emerson, author of Sons of Privilege: The Charleston Light Dragoons in the Civil War

"Guardian of Savannah is a much-needed study of Fort McAllister which includes discussion of a number of examples of Civil War technology and innovations. Ironclad warships, torpedoes, and rifled cannons all make their appearances here in this story of the earthen fort and its small band of defenders. Roger Durham is to be commended for explaining how these military technologies were utilized and how the lessons learned at this Georgia fortification had wider implications for this war and others."—Jeffrey Seymour, Auburn University

"In the winter of 1862–1863, a little-publicized duel took place along the Great Ogeechee River of Georgia, twelve miles south of the city of Savannah. The adversaries were newly constructed iron warshipspitted against a massive coast defense position built of the simplest materials: mud and sand. Roger S. Dunham has collected a large number of first-hand accounts by participants on both sides and quotes freely from many of them to narrate the story of the 'Guardian of Savannah'. Readers of Civil War history, especially naval warfare and the history of forts, will find much to savor here."—The Journal of America's Military Past

"This fascinating book will be enjoyed by any student of the war."—Blue & Gray Magazine