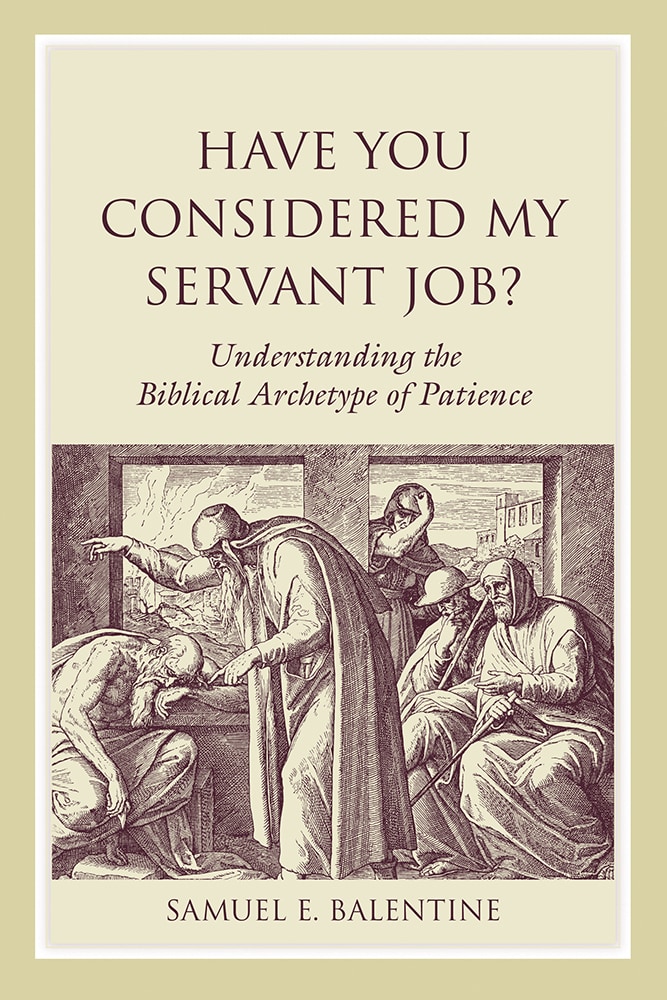 Have You Considered My Servant Job?

Understanding the Biblical Archetype of Patience

The question that launches Job's story is posed by God at the outset of the story: "Have you considered my servant Job?" (1:8; 2:3). By any estimation the answer to this question must be yes. The forty-two chapters that form the biblical story have in fact opened the story to an ongoing practice of reading and rereading, evaluating and reevaluating. Early Greek and Jewish translators emphasized some aspects of the story and omitted others; the Church Fathers interpreted Job as a forerunner of Christ, while medieval Jewish commentators debated conservative and liberal interpretations of God's providential love. Artists, beginning at least in the Greco-Roman period, painted and sculpted their own interpretations of Job. Novelists, playwrights, poets, and musicians—religious and irreligious, from virtually all points of the globe—have added their own distinctive readings.

In Have You Considered My Servant Job?, Samuel E. Balentine examines this rich and varied history of interpretation by focusing on the principal characters in the story—Job, God, the satan figure, Job's wife, and Job's friends. Each chapter begins with a concise analysis of the biblical description of these characters, then explores how subsequent readers have expanded or reduced the story, shifted its major emphases or retained them, read the story as history or as fiction, and applied the morals of the story to the present or dismissed them as irrelevant.

Each new generation of readers is shaped by different historical, cultural, and political contexts, which in turn require new interpretations of an old yet continually mesmerizing story. Voltaire read Job one way in the eighteenth century, Herman Melville a different way in the nineteenth century. Goethe's reading of the satan figure in Faust is not the same as Chaucer's in The Canterbury Tales, and neither is fully consonant with the Testament of Job or the Qur'an. One need only compare the descriptions of God in the biblical account with the imaginative renderings by Herman Melville, Walt Whitman, and Franz Kafka to see that the effort to understand why God afflicts Job "for no reason" (2:3) continues to be both compelling and endlessly complicated.


Samuel E. Balentine is a professor of Old Testament studies and director of graduate studies at Union Presbyterian Seminary in Richmond, Virginia. He is the author of eight books, including the Torah's Vision of Worship, general editor of the Smyth and Helwys Bible Commentary series, series editor of Interpretation: Resources for the Use of Scripture in the Church, and editor-in-chief of the Oxford Encyclopedia of Bible and Theology.

""Samuel Balentine 'considers Job' for the countless ways this biblical book, in all its rich complexities, has inspired readers over the centuries. . . Balentine's volume sparkles with insightful theological commentary and rigorous scholarship, and any exegetical course or study on Job would benefit from it.""—Interpretation: A Journal of Bible and Theology

""Balentine takes an unexpected, though illuminating, approach.""—The Journal of Religion

""In masterly fashion Balentine provides a tour de force of cultural interaction with the book of Job. He guides today's reader along the path of Job interpretation, exegesis, adaptation and imagining revealing the sheer variety of themes, meanings, creativity and re-readings that have been inspired by this one biblical book. Balentine shows us that not only is there "always someone playing Job" (MacLeish, J.B.) but there's always someone, past or present, reading this ever-enigmatic book.""—Katharine J. Dell, University of Cambridge

""In his Job commentary of 2006 Samuel Balentine established himself as the foremost theological interpreter of the Book of Job for our generation. Now in this present volume he has advanced and refined his reading of Job by attending to "reception history," that is, the various rich and suggestive ways in which Job has been read and misread. His prodigious learning (indicated by twenty-two pages of bibliography plus copious notes) permits him to reach back all the way to Prometheus, to the litigious reading of Wiesel and Kafka, and to the modernist theodicies of Voltaire and Leibniz. After all of that Balentine attends more immediately and more poignantly to the reality of human life before the mystery of God. In this work Balentine is at his best as a provocative, generative, and discerning theologian. The book will be must reading for any who care about the human crisis we now face, a crisis of our of making to be sure, but a crisis beyond our making hidden in the depths of evil, alienation and excessive certitude.""—Walter Brueggemann, Columbia Theological Seminary

""Balentine takes the novel approach of investigating the character of Job—and the characters in Job—by exploring the ways in which the history of reception has rendered them. Insightful, provocative, and sometimes disturbing, this volume makes an invaluable companion to exegetical and hermeneutical courses on the book of Job.""—Carol Newsom, Charles Howard Candler Professor of Old Testament/Hebrew Bible, Emory University

"The book is an intellectual tour de force."—Choice