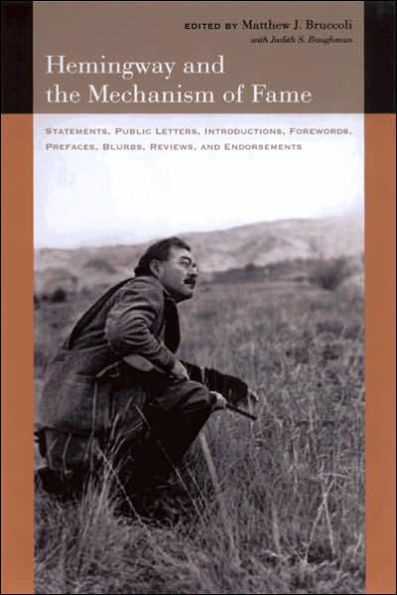 Hemingway and the Mechanism of Fame

Ernest Hemingway was famous for being famous. He assiduously cultivated different and sometimes divergent personae—sportsman, soldier, aesthetician, patriot, drinker, womanizer, intellectual, anti-intellectual, sage, brawler, world traveler, war correspondent, big-game hunter, and even author—each chosen to foster his place in the American cultural consciousness and support the sales of his books. In every role he projected the insider's air of authority and expertise that was presumed credible, even when not wholly deserved. His success in these self-legendizing efforts to couple nonliterary celebrity with literary stature is evident in his continued fame among those familiar and unfamiliar with his books.

Hemingway and the Mechanism of Fame assembles Hemingway's public writings about himself, all framed as documents of support for or criticism of other people and other products. Comprising fifty-four public statements and letters; twenty introductions, forewords, and prefaces; and twenty-nine book blurbs, reviews, and product endorsements, the collection chronicles the means by which Hemingway advanced his own standing through these literary and extraliterary writings.

From his commercial endorsements for the Parker 51 pen and Ballantine ale to his Nobel Prize acceptance statement and commentary on President Kennedy's inauguration, Hemingway shows himself to be an expert marketing strategist, infusing each piece with thoughtfully crafted autobiography designed to engage his public and promote his image. Arranged in chronological order and spanning more than forty years, the selections in this volume map the development of Hemingway's most complex, studied, criticized, parodied, and celebrated fictional character: Ernest Hemingway himself.

Judith S. Baughman is the author of F. Scott Fitzgerald in the Literary Masters series and coeditor of books about Fitzgerald, Hemingway, and Wolfe.

"Hemingway's hand holding a Parker 51 in a Life magazine ad hangs framed in my writing room, and it has always, oddly, made me feel closer to him. Matthew J. Broccoli's brilliantly conceived book, Hemingway and the Mechanism of Fame, is full of just such public gestures, and it revivifies my connectedness to Hemingway and enhances my understanding of him in surprisingly rich ways. This is the most unlikely of absolutely necessary books"—Robert Olen Butler

"Matthew Bruccoli and Judith Baughman have culled and collected a trove of significant material that, taken together, tells us more about Hemingway than most of the biographies and quite a lot, as well, about ourselves who gave the man's public myths a patina of credibility. This fine and useful book is a real contribution to our understanding of a great American writer."—George Garrett

"Ernest Hemingway didn't have talent, his talent had him, and it bounced him off the walls of his career until the end. His image is too much with us, his words on paper not enough. Hemingway and the Mechanism of Fame goes one more step toward curing this and adds an extra dimension to a writer who deserves all the history he can get."—Alan Furst

"Hemingway and the Mechanism of Fame is an invaluable and oddly riveting little volume about the Big Man that will delight the general reader and stimulate the student."—Christopher Buckley