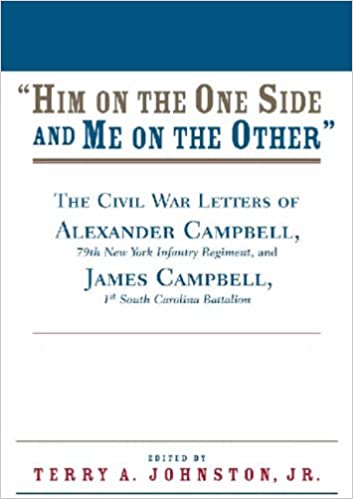 Him on the One Side and Me on the Other

Terry A. Johnston and Jr. Terry a. Johnston

Alexander and James Campbell emigrated from Scotland to the United States as teenagers in the 1850s and settled in vastly different regions of the country—Alexander in New York City and James in Charleston, South Carolina. When the Civil War broke out, Alexander and James opted to fight for their adopted states and causes: Alexander enlisted in the 79th New York "Highlanders" and James in the 1st South Carolina ("Charleston") Battalion. This collection tells their remarkable story through nearly eighty wartime letters.

Terry A. Johnston, Jr., follows the brothers as they endure the hardships of war and react to their plight. Alexander accompanied his regiment through Virginia, South Carolina, and Kentucky and was wounded in battle while bearing the regimental colors. James served with distinction near Charleston, was captured at the Battle of Battery Wagner, and spent the final two years of the war in three Northern prisons. The brothers experience a near-reunion on the battlefield of Secessionville, South Carolina, on June 16, 1862, where Alexander was part of the Union force that assaulted Tower Battery, a fort inhabited by James and his Confederate comrades.


Terry A. Johnston, Jr., is a developmental editor at Savas-Beatie Publications and former editor of North & South magazine.

"A unique presentation of soldier life in a war that was, for the Campbells, fought literally by brother against brother."—Civil War News

"These moving letters . . . splendidly document the concerns of the common soldier. . . . These are brothers one would like to have known"—Virginia Quarterly Review