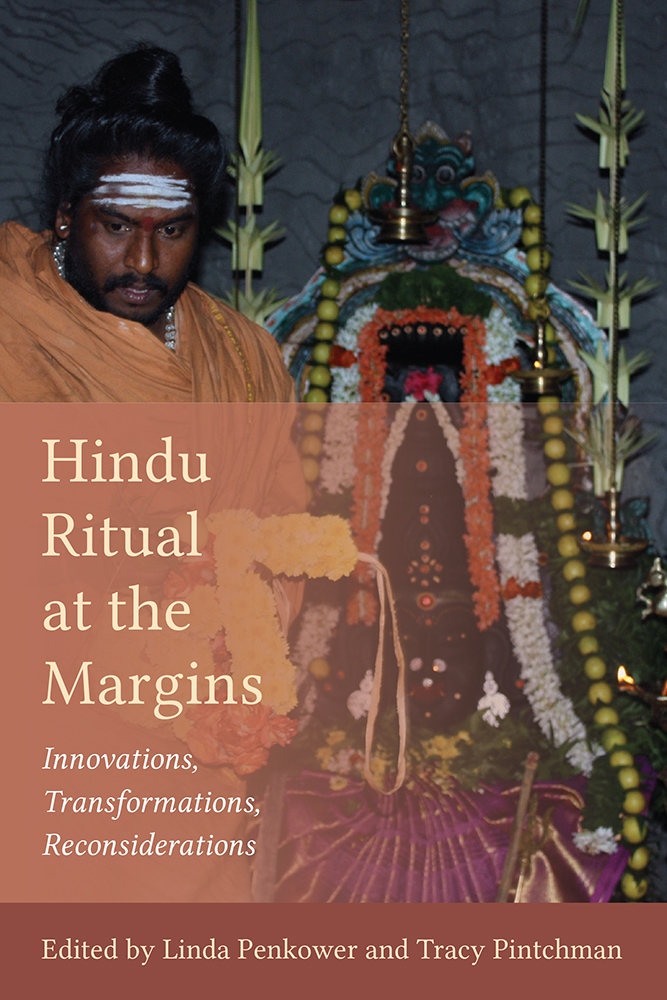 Hindu Ritual at the Margins

Hindu Ritual at the Margins explores Hindu forms of ritual activity in a variety of "marginal" contexts. The contributors collectively examine ritual practices in diaspora; across gender, ethnic, social, and political groups; in film, text, and art; in settings where ritual itself or direct discussion of ritual is absent; in contexts that create new opportunities for traditionally marginalized participants or challenge the received tradition; and via theoretical perspectives that have been undervalued in the academy.

In the first of three sections, contributors explore the ways in which Hindu ritual performed in Indian contexts intersects with historical, contextual, and social change. They examine the changing significance and understanding of particular deities, the identity and agency of ritual actors, and the instrumentality of ritual in new media. Essays in the second section examine ritual practices outside of India, focusing on evolving ritual claims to authority in mixed cultures (such as Malaysia), the reshaping of gender dynamics of ritual at an American temple, and the democratic reshaping of ritual forms in Canadian Hindu communities. The final section considers the implications for ritual studies of the efficacy of bodily acts divorced from intention, contemporary spiritual practice as opposed to religious-bound ritual, and the notion of dharma.

Based on a conference on Hindu ritual held in 2006 at the University of Pittsburgh, Hindu Ritual at the Margins seeks to elucidate the ways ritual actors come to shape ritual practices or conceptions pertaining to ritual and how studying ritual in marginal contexts—at points of dynamic tension—requires scholars to reshape their understanding of ritual activity.


Linda Penkower is an associate professor of religious studies at the University of Pittsburgh. She has published on the historical, social, institutional, and doctrinal aspects of East Asian Buddhism, especially the Chinese Tiantai tradition. Penkower is currently completing two monographs: "Tiantai Buddhism and the Construction of Lineage during the Tang" and "Shared Sacrality," an annotated translation of the Jin'gangbei (The Diamond Scalpel), the eighth-century Chinese locus classicus for the idea of insentient buddha-nature.

Tracy Pintchman is a professor of religious studies and director of the International Studies Program at Loyola University of Chicago. Her research interests include Hindu goddess traditions, women and religion, ritual studies, and transnational Hinduism. Her scholarly publications include more than twenty articles and book chapters, five edited and coedited volumes, and two monographs, The Rise of the Goddess in the Hindu Tradition and Guests at God's Wedding: Celebrating Kartik among the Women of Benares.

"This volume uses a wide lens to bring into view an unusually broad range of Hindu ritual behavior. The authors are textualists, film critics, anthropologists, and specialists in women's studies—some of the best known figures in Hindu studies today. Every chapter brings refreshing revelations, and the notorious 'empty ritual' is nowhere to be found."—John Stratton Hawley, Barnard College, Columbia University

"If you are intrigued by the transfer and transformations of Hindu rituals, by ritual agency and efficacy, this book will keep you turning the pages. Challenging received notions of the working of rituals, the contributors tell compelling stories of two weddings, a funeral, and a dog, of disappearing deities, and of fights over ropes. A delight for every student of Ritual Studies and Hinduism."—Ute Hüsken, professor of Sanskrit and coeditor of the Oxford Ritual Studies Series