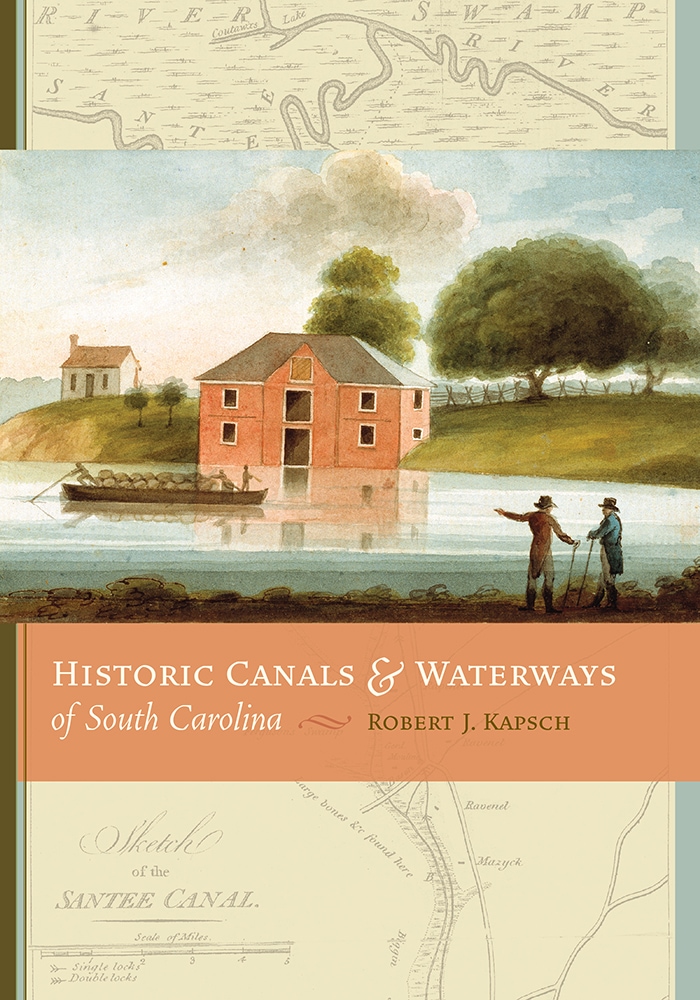 South Carolina's first transportation revolution was the development of a network of canals and waterways. From the 1790s to the 1830s, the Palmetto State was a preeminent leader in infrastructure improvements and developed an extensive system of more than two thousand miles of canals and waterways connecting virtually every part of the state with the coast and the port of Charleston. Robert J. Kapsch expertly recounts the complex history of innovation, determination, and improvement that fueled the canal boom in early-nineteenth-century South Carolina.

At the center of the state's waterway system was the Santee Canal, constructed between 1793 and 1800 to tie the Santee River and its upcountry watershed with the Cooper River and Charleston Harbor in the south. The Santee Canal was America's first summit-level canal—the most complex type of canal to plan, design, and build. Following the War of 1812, South Carolina set about building additional canals and improving navigation on the state's rivers to enable downstream commerce with Charleston via the Santee Canal. During this era South Carolina spent more money per citizen on internal improvements than did any other state. Kapsch chronicles the development and execution of these projects as well as the involvement of major figures in this effort, including John Christian Senf, Robert Mills, Abram Blanding, and Joel R. Poinsett.

As Kapsch notes, the geography of South Carolina dictated the development of its canals and river navigation schemes, but it was cotton, the state's all-important cash crop, that necessitated this mode of transportation. The goal was to transport cotton from plantations across the state to the port of Charleston for shipment. From the first settlement in South Carolina, economic success was in fact dependent on waterways. But in the 1830s the canal boom ended when another transportation innovation, the railroad, superseded waterway travel as primary link to the ports.

In this first comprehensive account of South Carolina's canal history, Kapsch relies on his experience as an engineer and historical researcher, as well as on numerous maps and illustrations, to tell a fascinating and forgotten tale from South Carolina's past.


Robert J. Kapsch is a researcher and writer for the Center for Historic Engineering and Architecture. Previously he served as senior scholar in historic architecture and engineering for the National Park Service, as project engineer for the Chesapeake and Ohio Canal National Historical Park, and as chief of the Historic American Buildings Survey / Historic American Engineering Record. Kapsch was awarded the Distinguished Service Medal, the highest award of the U.S. Department of Interior, for his work at the National Park Service. He is the author of Canals and The Potomac Canal: George Washington and the Waterway West and coauthor of The Monocacy Aqueduct on the Chesapeake and Ohio Canal and Seneca, Maryland: Standing Stones.

"Historic Canals and Waterways of South Carolina is a fascinating account of a monumental internal improvements program undertaken by the State of South Carolina in the nineteenth century to facilitate the movement of agricultural products to Charleston and finished goods to the Upstate. In his richly detailed narrative, Robert J. Kapsch shares the history of the sophisticated canal system and explores its planning and construction. He expertly documents the uniqueness of the engineering involved and in particular highlights the development of the Santee Canal, America's first summit-level canal, connecting his research to the broader context of transportation history beyond the region. Kapsch proves to be an informed and insightful guide to the effects of the canal system on the lives of South Carolinians at the time and on the complex history of state since."—Dan Elswick, senior historic architecture consultant, South Carolina State Historic Preservation Office

"This comprehensive look at the nineteenth-century development of canals and improved waterways in South Carolina is a masterful treatment of a historically important public works program to bring the agricultural products of interior South Carolina to the port of Charleston. Only Robert Kapsch, with his extensive background in both history and engineering, could produce such a thorough yet accessible treatment of this subject. Especially rich in contemporary and historic images of the physical remains of the system, Kapsch's work makes the commercial and technical details of this story vividly interesting and understandable."—Patrick Martin, professor of industrial archaeology, Michigan Technical University, and president, International Committee for the Conservation of the Industrial Heritage