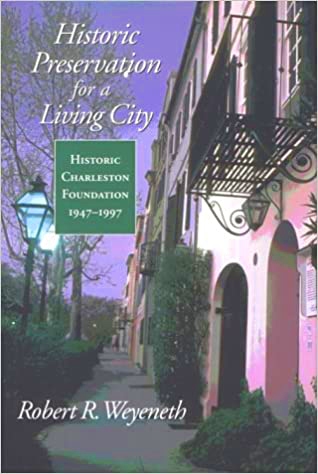 Historic Preservation for a Living City

A chronicle of remarkable preservation achievements

With this book Robert R. Weyeneth charts the changing philosophy of the American preservation movement during the last half-century. Weyeneth traces Historic Charleston Foundation's pathbreaking approach to preservation, from the organization's establishment by a handful of Charlestonians to its current wide-ranging concerns with the conservation of rural spaces and preservation of building craft traditions. He argues that Historic Charleston Foundation has been a leader in broadening the field of historic preservation from its purely educational focus, concerned primarily with the establishment and operation of house museums, to its current scope as a form of urban and environmental planning.

Weyeneth details how, within ten years of its founding in 1947, the foundation embarked on its Ansonborough project, a pioneering urban renewal and preservation initiative that propelled the young organization into the national spotlight in the 1950s and 1960s. He describes the foundation's innovative use of a revolving fund to rehabilitate an entire neighborhood, the considerable attention this approach attracted within the preservation movement, and the growing influence of the foundation in subsequent decades.

The success of the Ansonborough project raised concern about the new issue of gentrification. The foundation responded in the 1970s by using preservation to address problems of urban decay and inner-city housing in Charleston's African American neighborhoods. Weyeneth explains how such efforts to expand concepts of historic preservation continue through the present and how they keep the foundation at the forefront of the national preservation movement. He traces the foundation's recent interest in environmental concerns of regional importance, describing planning and conservation that have targeted metropolitan sprawl and suburban development as well as championing open space and rural and landscape preservation throughout South Carolina's Lowcountry.


Robert R. Weyeneth is an associate professor of history at the University of South Carolina in Columbia, where he serves as co-director of its public history program. He holds a Ph.D. from the University of California, Berkeley.

""For those curious about the origins of the city's preservation movement, this book is a good place to start."—Charleston Post & Courier

"Weyeneth . . . writes perceptively of preservation in Charelston, and his insights are all the more painful for those of us who have seen opportuiites for intelligent preservation squandered repeatedly by short-sighted leadership"—The State

"The book details the pioneering efforts of preservationists in a city where so much of its formative historic character had avoided the wrecking ball."—Times