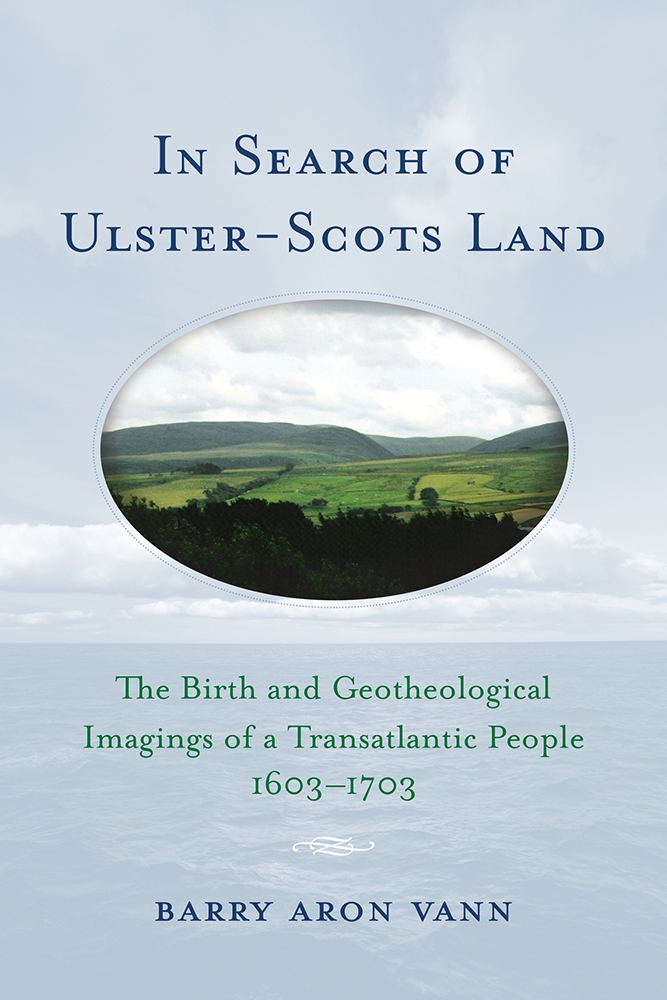 In Search of Ulster-Scots Land

The Birth and Geotheological Imagings of a Transatlantic People, 1603-1703

Drawing insights from geography, history, social psychology, sociology, and theology, Barry Aron Vann investigates the ways in which Scottish Calvinism affected the sense of identity and the migrations of native Scots first to Ulster and then to the American South.

Social and religious historians have conducted much research on Scottish colonial migrations to Ulster; however, there remains historical debate as to whether the Irish Sea in the seventeenth century was an intervening obstacle or a transportation artery. Vann presents a geographical perspective on the topic, showing that most population flows involving southwest Scotland during the first half of the seventeenth century were directed across the Irish Sea via centuries-old sea routes that had allowed for the formation of evolving cultural areas. As political or religious motivational factors presented themselves in the last half of that century, Vann holds, the established social and familial links stretched along those sea routes facilitated chain migration that led to the birth of a Protestant Ulster-Scots community. Vann also shows how this community constituted itself along religious and institutional rubrics of dissent from the Church of England, Church of Scotland, and Church of Ireland.

Within a century of the birth of this "Ulster-Scots Land," five immigration waves to America served as conduits for diffusing significant elements of that culture to the upper American South, where the Scots-Irish presence helped to form the cultural area referred to as the Bible Belt. The resulting effects of this settlement are still observed in both public and private spaces. It is from this lineage that families including the Adairs, Grahams, Seviers, Crocketts, Voiles, Duncans, Boones, Morgans, McKarneys, McKameys, Collins, and Rogerses spilled over the Appalachian Mountains to establish communities that still bear their mark. Vann maps this significant portion of the South's ethnic mosaic to show the genesis of the educational, political, and religious institutions that stem from Ulster Scots' thought worlds. With such deeply ingrained values, the southern Scots-Irish have influenced the region's staunchly conservative belief system, political ideology, and landscapes.


Barry Aron Vann is an associate professor of geography at Lincoln Memorial University in Harrogate, Tennessee, where he also serves as the founding director of programs in Appalachian development studies, geography, and social studies. He is the author of Rediscovering the South's Celtic Heritage.

"In this wide-ranging and insightful study, Barry Vann takes us from the poverty of early-seventeenth-century Scotland, via the Plantation of Ulster, to the American Bible Belt in search of the Ulster-Scots. This book provides exciting new perspectives on the geographies of religion and culture in the past. It is a challenging and thought-provoking work demonstrating the author's sure grasp of geography as well as history."—Ian D. Whyte, professor of Geography, Lancaster University

"Barry Vann has brought the insights of geography, in the form of geotheology, to the study of a religio-cultural entity stretching across centuries from Scotland to Ulster and then to Appalachia. In this careful study, he exposes the role of space and the sacred in the formation of culture, and explores how religion—through its integration into perceptions of the natural world—contributes to an ethnic identity even far removed from the homeland. An immigrant community is defined by more than religion, but not without religion, he posits, and this innovative approach has produced a welcome contribution to the study of Scottish, Irish, and American religion and culture."—David G. Mullan, professor of history and religious studies, Cape Breton University