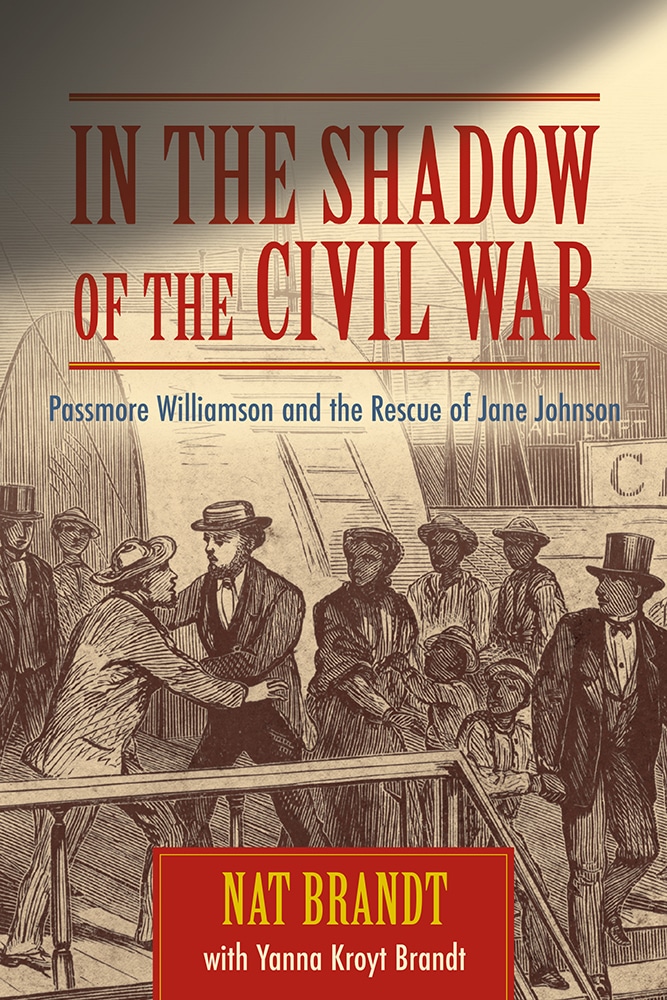 In the Shadow of the Civil War

Passmore Williamson and the Rescue of Jane Johnson

A heroic tale of personal sacrifices in the cause of liberty, foreshadowing the national conflict that followed

Six years before the onset of the Civil War, two courageous figures—one a free white man and one an enslaved black woman—risked personal liberty to ensure each other's freedom in an explosive episode that captured the attention of a nation on the brink of cataclysmic change. In this deeply researched account of the rescue of the slave Jane Johnson by the Philadelphia Quaker and fervent abolitionist Passmore Williamson, of the federal court case that followed, and of Johnson's selfless efforts to free the jailed Williamson, veteran journalist Nat Brandt and Emmy-winning filmmaker Yanna Kroyt Brandt capture the heroism and humanity at the heart of this important moment in American history.

In July 1855 Williamson and his colleague William Still responded to a written plea from Johnson and rushed to the Camden ferry dock to liberate her and her two children from their master in a daring confrontation. The abolitionists had no idea that Johnson's owner, Col. John Hill Wheeler, was connected to the highest levels of government and was a personal friend of President Franklin Pierce. As a result Wheeler was able to have Williamson arrested and confined to Moyamensing Prison, an institution notorious for harboring Philadelphia's worst criminals.

The case and Williamson's imprisonment became an international cause célèbre with famous leaders of the abolitionist movement, black and white, visiting the prisoner. In one of the episode's most dramatic moments, Johnson returned to Philadelphia, at the risk of her own freedom, to testify on Williamson's behalf. There were petitions in many states to impeach Judge John Kintzing Kane, who stubbornly refused to release Williamson. The case became a battle of wills between a man who was unwavering in his defiance of slavery and another determined to defend the so-called rights of the slave owner.

Williamson's martyrdom spotlighted Philadelphia as one northern city where the growing rifts between states' rights, federal mandates, and personal liberties had come to the fore. His case put a vivid, human face on the issue of slavery, helped to strengthen the will of its opponents, and highlighted the increasing inevitability of the Civil War.

Encompassing acts of brazen defiance, heroic self-sacrifice, high courtroom drama, and the rise of a cult of celebrity, the Brandts' brisk narrative takes readers into the lives of the central participants in this complex episode. Passmore Williamson, Jane Johnson, William Still, Colonel Wheeler, and Judge Kane are brought vibrantly to life as fully developed and flawed characters drawn unexpectedly into the annals of history. Enhanced by eleven illustrations, In the Shadow of the Civil War chronicles events that presage the divisive national conflict that followed and that underscore the passionate views on freedom and justice that continue to define the American experience in our own time.


Longtime journalist Nat Brandt has been a reporter for the Newark Star-Ledger, an editor for the New York Times, managing editor of American Heritage, editor in chief of Publishers Weekly, and a senior newswriter for CBS News. He is the author of ten previous nonfiction books—including The Town That Started the Civil War, The Man Who Tried to Burn New York, and Chicago Death Trap—as well as two novels. Brandt is a recipient of the Douglas Southall Freeman Award for Southern History as well as awards from the Illinois State Historical Society and the New Jersey Press Association.

Yanna Kroyt Brandt is a writer, director, and producer for film and television. Her work has been honored with nine Emmy awards as well as awards from the Writers Guild of America and prizes from more than fifty film festivals. She is the writer, director, and producer (and cocreator with Nat Brandt) of the prize-winning PBS documentary series The Crucible of the Millennium.

"In the Shadow of the Civil War is an exciting narrative of a conflict between slavery and freedom that had national consequences beyond the streets and courts of Philadelphia where it took place. Passmore Williamson went to jail for his part in helping Jane Johnson and her children achieve freedom in 1855, but then won his own liberty and vindicated the state sovereignty of Pennsylvania on behalf of freedom over the power of slavery wielded by the federal government. In their riveting account, the Brandts show how the publicity generated by this case moved the nation a step closer to the crisis of 1861."—James M. McPherson, author of Battle Cry of Freedom: The Civil War Era and This Mighty Scourge of War: The American Illiad, 1861–1865

"Based on excellent research, In the Shadow of the Civil War brilliantly illuminates the complex personal, legal, and societal factors surrounding slavery and race in the United States in the era just prior to the Civil War. An abolitionist's simple rescue mission in Philadelphia in 1855 emerged as anything but routine, and the resulting legal proceedings reflected the strengths and weaknesses of constitutional law and evoked the passions of a nation. The immense cast of characters superbly described in this comprehensive and elegantly written account reveal to us the human lives at the center of national controversy. This story dramatically and indelibly recreates the divergent ideals that coursed throughout the country on the eve of war and contributes enormously to our understanding of rich regional and national implications inherent in the emancipation of Jane Johnson and her sons. In short, the Brandts, both masterful storytellers, have given us a really marvelous book."—Franklin W. Knight, Leonard and Helen R. Stulman Professor of History, Johns Hopkins University

"In the Shadow of the Civil War, by Nat Brandt with Yanna Kroyt Brandt, is a compact and thrilling tale of civil disobedience. Brandt . . . has created a compelling and detailed look into one dramatic rescue and one act of civil disobedience that helped to inspire others to break the hated Fugitive Slave Law."—ForeWord Magazine

"Nat and Yanna Brandt's book explores the controversial 1855 rescue of Jane Johnson and her two sons, slaves of Joseph Wheeler, the U.S. ambassador to Nicaragua. The Brandts believe that fugitive slave cases like this one humanized the slavery issue, and made abolitionists appear principled and humanistic. The case's major characters spring to life in the Brandt's vivid writing. . . . admirably capture the personal, legal, and social dimensions of these cases. They fill important gaps in our understanding of the fugitive slave issue in the North, and contribute significantly to our understanding of this important issue on the eve of the Civil War."—Civil War History

"The story of Passmore Williamson—a Quaker abolitionist who used a Pennsylvania law to free Jane Johnson from bondage in 1855—reminds us that every grand narrative has its roots in the households and hearts of its citizens. In the Shadow of the Civil War: Passmore Williamson and the Rescue of Jane Johnson draws upon personal papers, legal documents, and newspaper commentary to provide a compelling account of one individual's commitment to freedom in a slave society struggling, as Thomas Jefferson so aptly put it, to hold a 'wolf by the ears."—H-Net Reviews

A Selection of the History Book Club