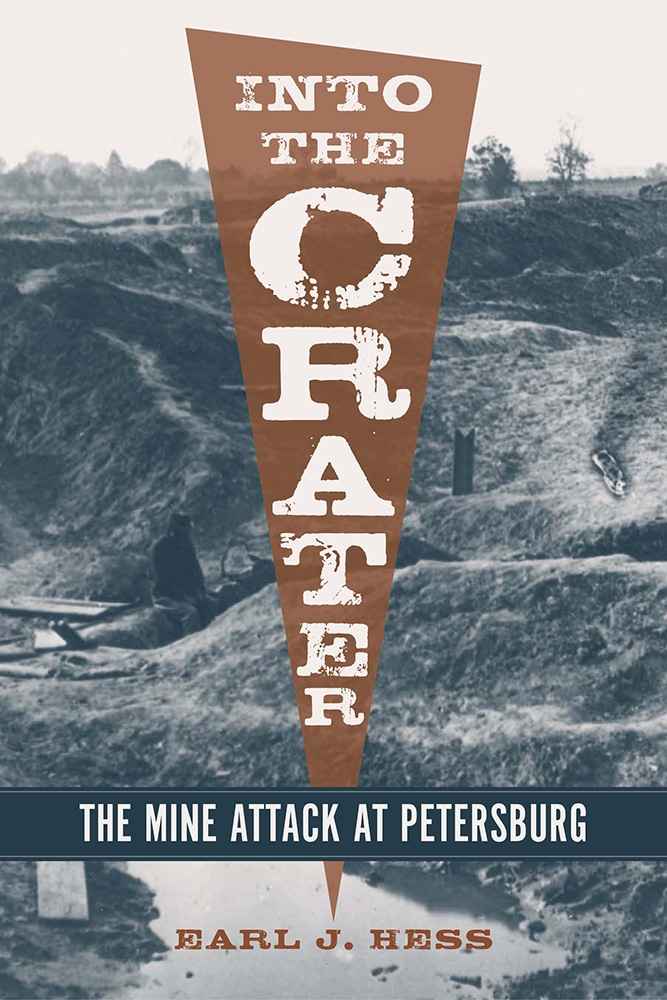 The Mine Attack at Petersburg

The battle of the Crater on July 30, 1864, was the defining event in the 292-day campaign around Petersburg, Virginia, in the Civil War and one of the most famous engagements in American military history. Although the bloody combat of that "horrid pit" has been recently revisited as the centerpiece of the novel and film versions of Charles Frazier's Cold Mountain, the battle has yet to receive a definitive historical study. Distinguished Civil War historian Earl J. Hess fills that gap in the literature of the Civil War with Into the Crater.

The Crater was central in Ulysses S. Grant's third offensive at Petersburg and required digging of a five-hundred-foot mine shaft under enemy lines and detonating of four tons of gunpowder to destroy a Confederate battery emplacement. The resulting infantry attack through the breach in Robert E. Lee's line failed terribly, costing Grant nearly four thousand troops, among them many black soldiers fighting in their first battle. The outnumbered defenders of the breach saved Confederate Petersburg and inspired their comrades with renewed hope in the lengthening campaign to possess this important rail center.

In this narrative account of the Crater and its aftermath, Hess identifies the most reliable evidence to be found in hundreds of published and unpublished eyewitness accounts, official reports, and historic photographs. Archaeological studies and field research on the ground itself, now preserved within the Petersburg National Battlefield, complement the archival and published sources. Hess re-creates the battle in lively prose saturated with the sights and sounds of combat at the Crater in moment-by-moment descriptions that bring modern readers into the chaos of close range combat. Hess discusses field fortifications as well as the leadership of Union generals Grant, George Meade, and Ambrose Burnside, and of Confederate generals Lee, P. G. T. Beauregard, and A. P. Hill. He also chronicles the atrocities committed against captured black soldiers, both in the heat of battle and afterward, and the efforts of some Confederate officers to halt this vicious conduct


Earl J. Hess is the Stewart W. McClelland Chair in History at Lincoln Memorial University in Harrogate, Tennessee. Hess is the author of many studies of the Civil War, including Pickett's Charge: The Last Attack at Gettysburg, a Pultizer Prize nominee and winner of the James I. Robertson Literary Prize, and Lee's Tar Heels: The Pettigrew-Kirkland-MacRae Brigade, winner of the Douglas Southall Freeman Award. His recent books include In the Trenches at Petersburg: Field Fortifications and Confederate Defeat and The Rifle Musket in Civil War Combat: Reality and Myth.

"In this most detailed account ever produced of the unusual July, 1864, battle at Petersburg, Virginia, Hess challenges several traditional beliefs. This is a must-have book for anyone who studies Civil War military history in depth."—James I Robertson, Jr, Alumni Distinguished Professor in History, Virginia Tech

"With impressive research and persuasive interpretation, Earl J. Hess paints a comprehensive picture of one of the most intriguing episodes of the Civil War. This book cuts through the confusion in the Crater with poignant clarity, surpassing all previous renditions of that fascinating story."—William Marvel, author of Lincoln's Darkest Year: The War in 1862

"Hess has produced yet another Civil War classic—a compelling narrative and astute analysis of one of its most dramatic and most confusing battles. Using a vast array of unpublished and published accounts by combatants to craft a masterful moment-by-moment examination of the Battle of the Crater and its immediate aftermath, this is the clearest picture yet of how a Federal mine was built underneath the Confederate lines at Petersburg, how the assault against those lines was planned and executed, and why it ultimately failed. . . . Into The Crater is everything we have come to expect and appreciate from Hess's previous landmark studies: authoritative, persuasive, accessible, and simply indispensable."—J. Tracy Power, author of Lee's Miserables: Life in the Army of Northern Virginia from the Wilderness to Appomattox

"Hess applies his many gifts as a historian to one of the Civil War's remarkable military incidents. The battle of the Crater combined impressive engineering, inept leadership, the first appearance of black soldiers on a large scale in the Virginia theater, and bitter combat—all of which Hess handles beautifully. Both enjoyable and instructive, the narrative amply rewards a careful reading."—Gary W Gallagher, author of The Confederate War

"With his encyclopedic research and impressive narrative style, Earl J. Hess sets a new standard in modern studies of the Battle of the Crater, one of the most unique military actions of the American Civil War."—William Glenn Robertson, director of the Combat Studies Institute, U.S. Army Combined Arms Center, Fort Leavenworth