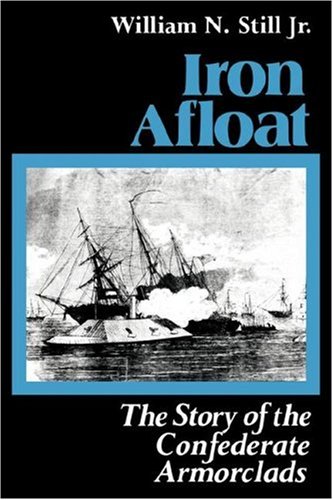 Everyone knows the story of the battle of the Monitor and the Merrimack. But how many people know the story behind the Confederacy's attempt to build a fleet of armorclad vessels of war?

When the Civil War began, the South had virtually no navy, few seamen, and limited shipbuilding facilities. In order to defend its ports against a well-established Northern navy, the South had to resort to innovation, and the Confederate ironclad navy was born.

The Confederate government commissioned and put into operation twenty-two armorclad vessels of war. This is their story. From the inception of the program, through the problems of building the vessels, through the careers of the vessels themselves (including gripping battle descriptions), to their eventual destruction or surrender, it is all here. Iron Afloat is history that reads like a novel and will appeal to readers interested in the Civil War and Confederacy as well as to military and naval historians.


William N. Still Jr. is Professor History and co-director of the Program in Maritime History and Underwater Research at East Carolina University in Greenville, North Carolina. Dr. Still received his Ph.D. from the University of Alabama in 1964. He is a member of the United States Commission on Maritime History; chairman, Governor's Advisory Committee on Archaeology; member, Board of Directors of the Historical Society of North Carolina. Dr. Still is the author of Confederate Shipbuilding; American Sea Power in the World; and Why the South Lost the Civil War.

"Iron Afloat will appeal to scholars and Civil War buffs alike and should remain the standard work on Confederate ironclads for a long time, since the author has exhausted just about all the sources now known"—Florida Historical Quarterly

"The result of Dr. Still's effort is a book not only highly readable but also one that will be used for reference for many years to come. In short, this is historical reporting at its best."—James I. Robertson