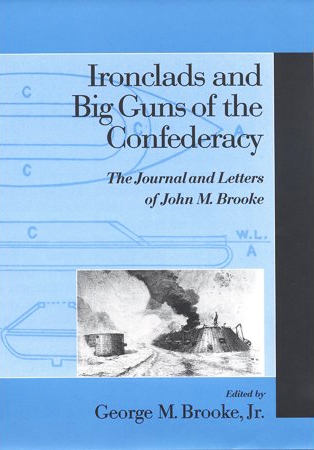 Ironclads and Big Guns of the Confederacy

The Journal and Letters of John M. Brooke

An inside look at the Confederacy's military science and technology

Loaded with previously unavailable information about the Confederate Navy's effort to supply its fledgling forces, the wartime diaries and letters of John M. Brooke (1826-1906) tell the neglected story of the Confederate naval ordnance office, its innovations, and its strategic vision. As Confederate commander of ordnance and hydrography in Richmond, Virginia, during the Civil War, Brooke numbered among the military officers who resigned their U.S. commissions and "went South" to join the Confederate forces at the onset of conflict. A twenty-year veteran of the United States Navy who had been appointed a midshipman at the age of fourteen, Brooke was a largely self-taught military scientist whose inventions included the Brooke Deep-Sea Sounding Lead. In addition to his achievements as an inventor, Brooke was a draftsman, diarist, and inveterate letter-writer. His copious correspondence about military and personal matters from the war yields detailed and often unexpected insights into the Confederacy's naval operations.

Charged with developing a vessel that could break the Union blockade, Brooke raised the Merrimack, a wooden vessel scuttled by the Union Navy, and outfitted it with armor plates as the CSS Virginia. Brooke's papers trace his conception of the plan to create the first Confederate ironclad warship and offer insight into other innovations, revealing a massive amount of factual information about the Confederacy's production of munitions.


George M. Brooke, Jr., is professor emeritus of history at the Virginia Military Institute and the grandson of John M. Brooke. A veteran of World War II, Brooke is the author of John M. Brooke, Naval Scientist and Educator and John M. Brooke's Pacific and Japanese Adventure, 1858–1860. He lives in Lexington, Virginia.

"Scholars will welcome the long anticipated publication of the wartime diaries and letters of John M. Brooke because it helps fill a major gap in Civil War literature. Too little has been written about the role of science and technology in the course of the war, especially from the southern perspective. As an untutored genius, Brook was a perfect representative of American ingenuity in the nineteenth century. Ironclads and Big Guns of the Confederacy provides yet another compelling argument that the American Civil War was truly the world's first modern war."—Charles F. Bryan Jr., Virginia Historical Society

"John M. Brooke was the Confederacy's ordnance genius, and now, thanks to this superbly edited volume, we have the opportunity to see that extraordinary mind at work. George M. Brooke, Jr. has given us one of the most valuable books on Confederate naval history to appear in recent years. Ironclads and Big Guns of the Confederacy deserves an honored place on every Civil War bookshelf."—Charles Dew, Williams College

"Superbly edited by Brooke's grandson, a professor emeritus at Virginia Military Institute, this book will quickly take a qualified place among the outstanding works on the South's 'war at sea.'"—The Roanoke Times

"George Brooke Jr. deserves our thanks for making his grandfather's illuminating correspondence and journal available. Civil War scholarship will be the better for it."—Civil War Book Review