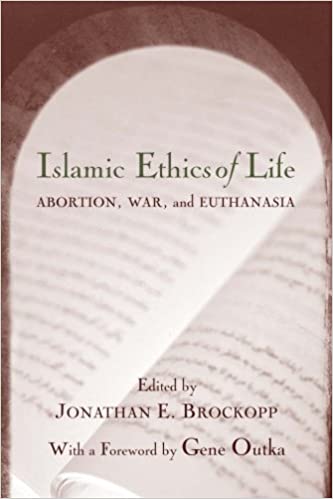 A pioneering work on controversial issues within the Muslim world

Islamic Ethics of Life considers three of the most contentious ethical issues of our time—abortion, war, and euthanasia—from the Muslim perspective. Distinguished scholars of Islamic studies have collaborated to produce a volume that both integrates Muslim thinking into the field of applied ethics and introduces readers to an aspect of the religion long overlooked in the West. This collective effort sets forth the relationship between Islamic ethics and law, clearly revealing the complexity and richness of the Islamic tradition as well as its responsiveness to these controversial modern issues. The contributors analyze classical sources and survey the modern ethical landscape to identify guiding principles within Islamic ethical thought. Clarifying the importance of pragmatism in Islamic decision making, the contributors also offer case studies related to specialized topics, including "wrongful birth" claims, terrorist attacks, and brain death. The case studies elicit possible variations on common Muslim perspectives. The contributors situate Muslim ethics relative to Christian and secular accounts of the value of human life, exposing surprising similarities and differences.

In an introductory overview of the volume, Jonathan E. Brockopp underscores the steady focus on God as the one who determines the value of human life, and hence as the final arbiter of Islamic ethics. A foreword by Gene Outka places the volume in the context of general ethical studies, and an afterword by A. Kevin Reinhart suggests some significant ramifications for comparative religious ethics.


Jonathan E. Brockopp is an associate professor of religious studies at Pennsylvania State University. The holder of graduate degrees from Yale University, he has published widely in the fields of Islamic law and Islamic ethics. His most recent book, written with Jacob Neusner and Tamara Sonn, is Judaism and Islam in Practice: A Sourcebook. He lives in State College, Pennsylvania.

"Islamic Ethics of Life makes a significant contribution to the discussion of religious ethics, not least by addressing the need for an anthology convenient for classroom use. Those who teach courses in religious ethics will find the essays a useful resource for displaying contemporary Islamic judgments regarding abortion, war, and euthanasia. Those who teach courses in Islamic Studies will similarly find the volume a useful supplement to the standards of Islamic tradition."—John Kelsay, Richard L. Rubenstein Professor, Department of Religion, Florida State University, and author of Islam and War: A Study in Comparative Ethics