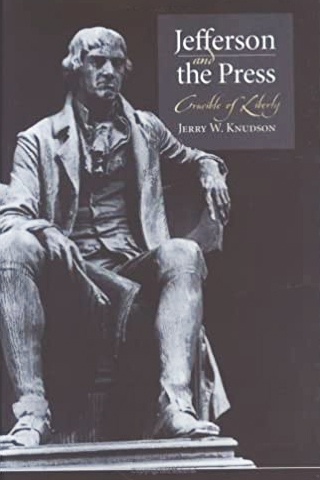 Jefferson and the Press

With the exception of Abraham Lincoln, no president prior to the twentieth century has been more vilified by the U.S. news media than Thomas Jefferson. Jefferson and the Press demonstrates the power of the press in the early years of the Republic. Four-fifths of the young nation's 235 newspapers were Federalist but, as Jerry W. Knudson explains, the minority Republican newspapers combated these odds through direct invectives and vehemently candid reportage.

Knudson details the coverage of four Federalist and four Republican newspapers in wide circulation to six major episodes of the Jeffersonian era: the election of 1800-1801, the return of Thomas Paine from revolutionary France, the Louisiana Purchase, the Hamiltonâ"Burr duel, the impeachment of Supreme Court Justice Samuel Chase, and the economic embargo of 1807-1809. Rocked by domestic scandals, the American nation read accounts in Federalist papers that demonized Jefferson and in Republican papers that lauded the president's achievements. Knudson profiles the men projecting these radically different views—savvy editors who embraced their ability to channel public opinion and who often became famous personalities in their own right, including Samuel Harrison Smith of National Intelligencer in Washington, DC, and William Duane of Philadelphia's Aurora. He shows these editors to have been sophisticated political "scribblers" who fearlessly printed what they thought with bluntness and ferocity that might shock twenty-first-century readers.

Concerned with how these charged verbal skirmishes in the press both molded and reflected public opinion, Knudson reveals the power, abrasiveness, and polarizing effects of a free but quite partisan press as the only source of public information during the young nation's first major shift in leadership. Diverging from accepted views, he frames his argument to illustrate that newspapers reached their height of influence and malevolence during Jefferson's presidency rather than that of Andrew Jackson in the 1820s and 1830s.


Jerry W. Knudson, professor emeritus of journalism at Temple University, is a former journalist who has specialized in the history of the press in both North America and Latin America. He earned a Ph.D. in history at the University of Virginia, where he was one of the first Jefferson Fellows, and received a Freedom Forum Award from Gannett Foundation for his long-term coverage of the Pinochet dictatorship in Chile.

"Jerry Knudson has put his heart and soul into this important work about the time of Jefferson viewed through the press. Not only does he dwell upon our great president and the friendly, and frequently virulent, little journals of the early 1800s, but he has given us the political story of the election controversies, the Louisiana Purchase, Hamilton and Burr, and the drifting into war with England. Jefferson has long been Knudson's passion, and that passion may be found on every page of this remarkable book."—Calder M. Pickett, Clyde Reed Emeritus Professor of Journalism, University of Kansas