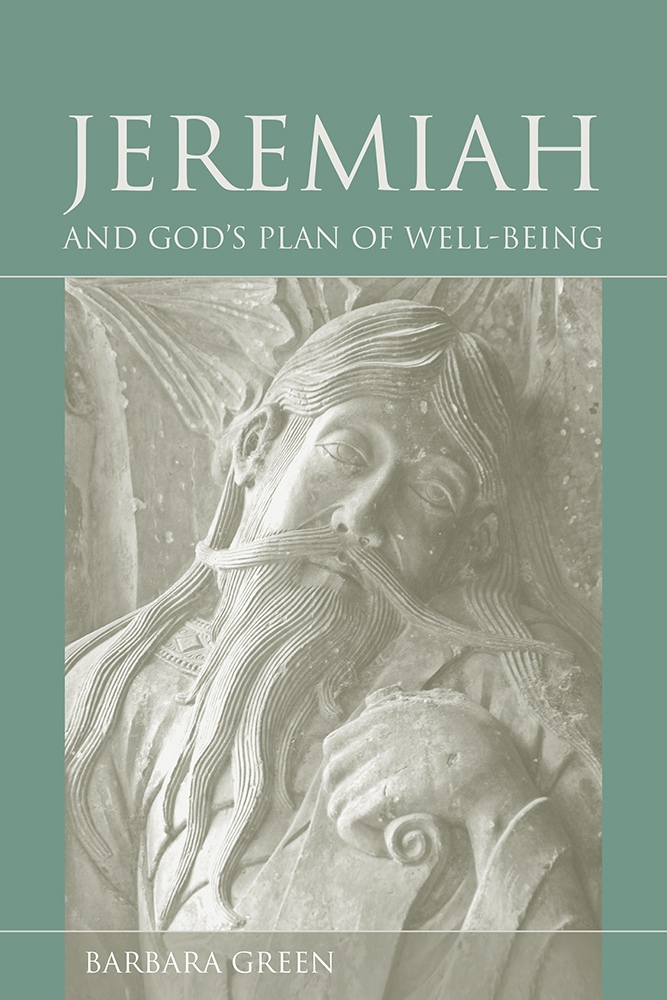 Jeremiah and God's Plans of Well-being

In Jeremiah and God's Plans of Well-being, Barbara Green explores the prophet Jeremiah as a literary persona of the biblical book through seven periods of his prophetic ministry, focusing on the concerns and circumstances that shaped his struggles. Having confronted the vast complexity of scholarly issues found in the Book of Jeremiah, Green has chosen to examine the literary presentation of the prophet rather than focus on the precise historical details or the speculative processes of composition. What Green exposes is a prophet affected by the dire circumstances of his life, struggling consistently, but ultimately failing at his most urgent task of persuasion.

In the first chapter Green examines Jeremiah's predicament as he is called to minister and faces royal opposition to his message. She then isolates the central crisis of mission, the choice facing Judah, and the sin repeatedly chosen. Delving into the tropes of Jeremiah's preaching and prophecy, she also analyses the struggle and lament that express Jeremiah's inability to succeed as an intermediary between God and his people. Next Green explores the characterizations of the kings with whom Jeremiah struggled and his persistence in his ministry despite repeated imprisonment, and, finally, Green focuses on Jeremiah's thwarted choice to remain in Judah at the end of the first temple period and his descent into Egypt after the assassination of Gedaliah.

In Jeremiah and God's Plans of Well-being, Green shows the prophet as vulnerable, even failing at times, while suggesting the significance of his assignment and unlikelihood of success. She explores the complexities of the phenomenon of prophecy and the challenges of preaching unwelcome news during times of uncertainty and crisis. Ultimately Green provides a fresh treatment of a complex biblical text and prophet. In presenting Jeremiah as a literary figure, Green considers how his character continues to live on in the traditions of Judaism and Christianity today.


Barbara Green is a professor of biblical studies at the Dominican School of Philosophy and Theology at the Graduate Theological Union in Berkeley, California. She is the author of several books including Jonah's Journeys; How Are the Mighty Fallen? A Dialogical Study of King Saul in 1 Samuel; and Mikhail Bakhtin and Biblical Scholarship: An Introduction.

"With a lucid, creative, and thoroughly engaging style, Barbara Green brings the book and character of Jeremiah to life in a way that is scholarly, reader-friendly, and breathtaking in scope and depth. This well researched study is simply brilliant and by far one of Green's best works to date."—Carol J. Dempsey, professor of theology, University of Portland

"Barbara Green picks up previous conversations and through the narratological model shows us Jeremiah in new ways. As she reveals and revels in the literary units she exposes Jeremiah in his/its complexity. Green does best by showing that the theo-political complexities of any age make Jeremiah both relatable and fascinating."—Steed V. Davidson, associate professor of Old Testament, Pacific Lutheran Theological Seminary and Church Divinity School of the Pacific

"An ideal fit for a longstanding series, Barbara Green's responsible and creative study of Jeremiah pays close attention to the complexities of the prophetic character and the unfolding of his poetic vision, and will be welcomed by readers keen to further learn from this remarkable classic."—Keith Bodner, professor of religious studies, Crandall University

"With unmatched rhetorical skill and depth of analysis, Green extricates Jeremiah from the web of language and the film of appearances disclosing his theological and moral struggles, triumphs and failures. The unexpectedly abundant theological yield, both comforting and disturbing, harvested from this in-depth encounter with the prophet and his God, earmarks this study as exemplary."—Gina Hens-Piazza, professor of biblical studies, Jesuit School of Theology, Santa Clara University of the Graduate Theological Union