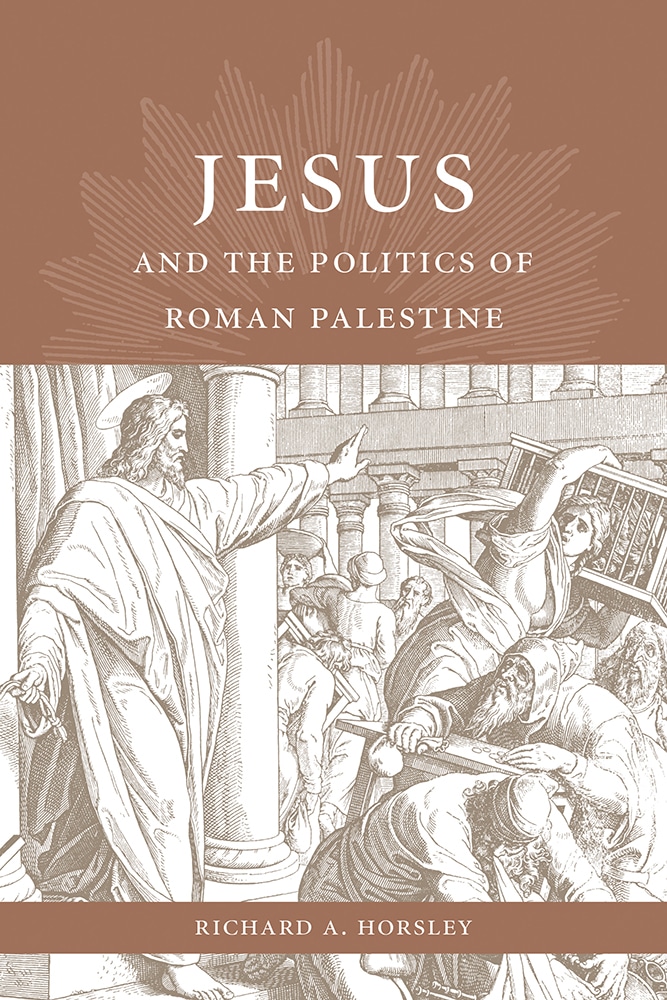 Jesus and the Politics of Roman Palestine

In Jesus and the Politics of Roman Palestine, Richard A. Horsley offers one of the most comprehensive critical analyses of Jesus of Nazareth's mission and how he became a significant historical figure. In his study Horsley brings a fuller historical knowledge of the context and implications of recent research to bear on the investigation of the historical Jesus. Breaking with the standard focus on isolated individual sayings of Jesus, Horsley argues that the sources for Jesus in historical interaction are the Gospels and the speeches of Jesus that they include, read critically in their historical context.

This work addresses the standard assumptions that the historical Jesus has been presented primarily as a sage or apocalyptic visionary. In contrast, based on a critical reconsideration of the Gospels and contemporary sources for Roman imperial rule in Judea and Galilee, Horsley argues that Jesus was fully involved in the conflicted politics of ancient Palestine. Learning from anthropological studies of the more subtle forms of peasant politics, Horsley discerns from these sources how Jesus, as a Moses- and Elijah-like prophet, generated a movement of renewal in Israel that was focused on village communities.

Following the traditional prophetic pattern, Jesus pronounced God's judgment against the rulers in Jerusalem and their Roman patrons. This confrontation with the Jerusalem rulers and his martyrdom at the hands of the Roman governor, however, became the breakthrough that empowered the rapid expansion of his movement in the immediately ensuing decades. In the broader context of this comprehensive historical construction of Jesus's mission, Horsley also presents a fresh new analysis of Jesus's healings and exorcisms and his conflict with the Pharisees, topics that have been generally neglected in the last several decades.


Richard A. Horsley was the Distinguished Professor of Liberal Arts and the Study of Religion at the University of Massachusetts, Boston. He is a prolific author with twenty New Testament studies to his credit, including Scribes, Visionaries, and the Politics of Second Temple Judea.

"Long a troubler of the 'scholarly consensus' regarding 'historical Jesus' research, Richard Horsley has produced a masterful synthesis of his work to date, as well as defining the agenda of future research into the political and cultural context of the 'Jesus movement' in first-century Judea. Horsley's application of perspectives on medical anthropology to the problem of Jesus's miracles and exorcisms is particularly helpful, as is his depiction of the socio-cultural pressures placed upon first-century Judeans by the Roman occupation. Scholars and students alike will benefit from tracing Horsley's carefully argued work."—Martin S. Jaffee, professor emeritus of comparative religion, University of Washington

"Richard Horsley, always provocative and stimulating, offers here a fresh look at the historical Jesus in light of the politics of Roman Palestine. Readers, specialists and the general public alike, will find this book deeply engaging."—Adela Yarbro Collins, Buckingham Professor of New Testament Criticism and Interpretation, Yale Divinity School, Yale University, and author of Crisis and Catharsis: The Power of the Apocalypse and Mark: A Commentary

"Among the many books composed in the wake of the Quest for the historical Jesus, Richard Horsley's study is a much needed contribution. His is one of the socially most sensitive interpretations of the gospels, especially of Mark and Q. As a historian of the politics of Roman Palestine he is in a class by himself. Vividly evoking time and circumstances of Roman Palestine, easily accessible, and intriguingly original, this book fills a big lacuna in the ongoing Quest of Jesus' life and death."—Werner H. Kelber, Isla Carroll and Percy E. Turner Professor Emeritus in Biblical Studies, Rice University, and author of The Oral and the Written Gospel: The Hermeneutics of Speaking and Writing in the Synoptic Tradition, Mark, Paul, and Q; Mark's Story of Jesus and Kingdom in Mark

"This slim and imminently readable volume is perhaps Horsley's most mature and elegant statement yet of the method and results of his own, distinctive quest for the historical Jesus. His iconoclasm has been prescient in the past. Again he presses forward and we do well to follow."—Stephen J. Patterson, George H. Atkinson Professor of Religious and Ethical Studies, Willamette University

"With mature reflection and focus on the major sources, Richard Horsley explains why he has concluded that Jesus from Nazareth, the Israelite prophet in Galilee, vilified the scribes and Pharisees. These Jewish leaders sought to serve the temple-state, but abused villagers. Horsley's writing is engaging and lucid and he astutely shows how Jesus' harsh criticism is 'based on Mosaic covenantal commandments.' Highly recommended for its synthesis and perspective. Jesus was by no means a-political. Excellent for classes."—James H. Charlesworth, director and editor, Princeton Dead Sea Scrolls Project, George L. Collord Professor of New Testament Language and Literature, Princeton Theological Seminary

"All in all, Jesus and the Politics of Roman Palestine is certainly an impressive text, covering a wide range of topics on the environment Jesus. If someone wanted to dive into the issue of Jesus and politics, this book would be an excellent resource."—Daniel Gullotta