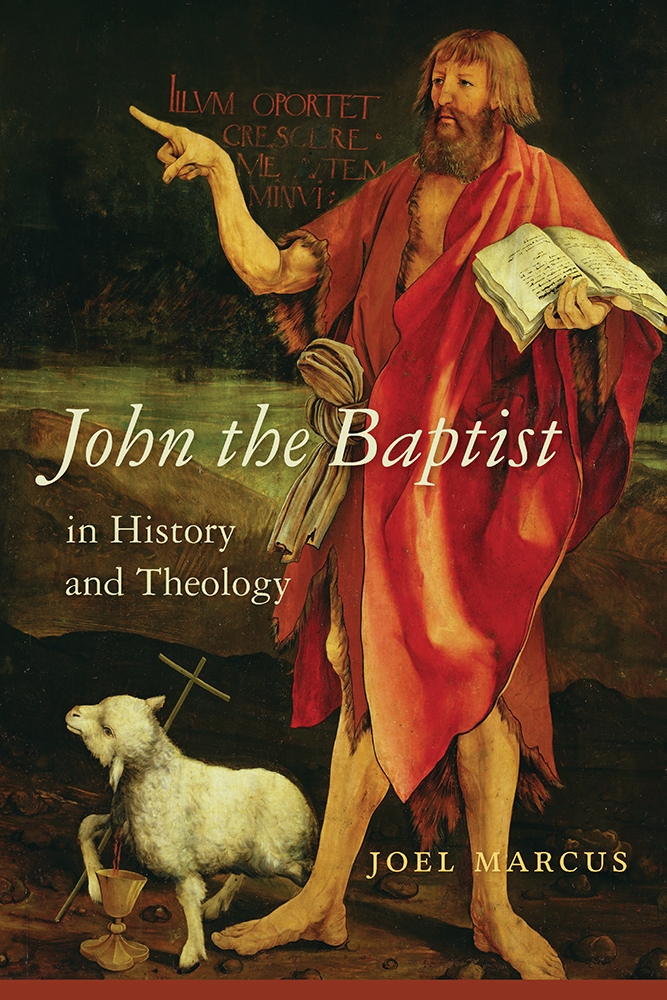 John the Baptist in History and Theology

While the Christian tradition has subordinated John the Baptist to Jesus of Nazareth, John himself would likely have disagreed with that ranking. In this eye-opening new book, John the Baptist in History and Theology, Joel Marcus makes a powerful case that John saw himself, not Jesus, as the proclaimer and initiator of the kingdom of God and his own ministry as the center of God's saving action in history.

Although the Fourth Gospel has the Baptist saying, "He must increase, but I must decrease," Marcus contends that this and other biblical and extrabiblical evidence reveal a continuing competition between the two men that early Christians sought to muffle. Like Jesus, John was an apocalyptic prophet who looked forward to the imminent end of the world and the establishment of God's rule on earth. Originally a member of the Dead Sea Sect, an apocalyptic community within Judaism, John broke with the group over his growing conviction that he himself was Elijah, the end-time prophet who would inaugurate God's kingdom on earth. Through his ministry of baptism, he ushered all who came to him—Jews and non-Jews alike—into this dawning new age. Jesus began his career as a follower of the Baptist, but, like other successor figures in religious history, he parted ways from his predecessor as he became convinced of his own centrality in God's purposes. Meanwhile John's mass following and apocalyptic message became political threats to Herod Antipas, who had John executed to abort any revolutionary movement.

Based on close critical-historical readings of early texts—including the accounts of John in the Gospels and in Josephus's Antiquities—as well as parallels from later religious movements, John the Baptist in History and Theology situates the Baptist within Second Temple Judaism and compares him to other apocalyptic thinkers from ancient and modern times. It concludes with thoughtful reflections on how its revisionist interpretations might be incorporated into the Christian faith.


Joel Marcus is a professor of New Testament and Christian origins at Duke Divinity School. His publications include Jesus and the Holocaust: Reflections on Suffering and Hope and Mark: A New Translation with Introduction and Commentary.

"a highly persuasive commentary on the act of balancing theological and scholarly considerations with the varying reports about John the Baptist in the New TestamentMarcus has faced the hermeneutical challenge of envisioning a more robust Baptist figure and has succeeded in convincing the reader that there is nothing to fear from the act of restoring those personality traits to John that were deemed by earlier generations of Christians to be too embarrassing to retain: his self-confidence, competitive spirit, and conviction of purpose."—The Catholic Biblical Quarterly

"Marcus's book on the Baptist is learned, insightful, and provocative. The author considers all relevant ancient Jewish and early Christian evidence, and then reaches further, drawing interesting analogies from later Mandean, Islamic, and even Baha'i sources. From now on, scholars thinking about John the Baptist should start right here."—Jonathan Klawans, Boston University

"It is high time for a new study of the historical John the Baptist, and Joel Marcus reviews the evidence with a fine eye for detail and sensitivity to issues of ancient polemic. This is a rich scholarly study that provides both historical and theological reflections, and much food for thought."—Joan Taylor, King's College London

"No one can understand the historical Jesus without first coming to grips with John the Baptist. In a study that is massively researched, brimming with insights, and engagingly written, Joel Marcus has provided a compelling account that should be the definitive statement of our generation"—Bart D. Ehrman, University of North Carolina at Chapel Hill

"This is an exemplary work of historical reconstruction—informed, rigorously critical, and imaginative in the best sense of the word. The intriguing cross-cultural parallels are an added bonus. If you want to know about the historical John the Baptist, this is the place to start."—Dale C. Allison, Jr., Princeton Theological Seminary