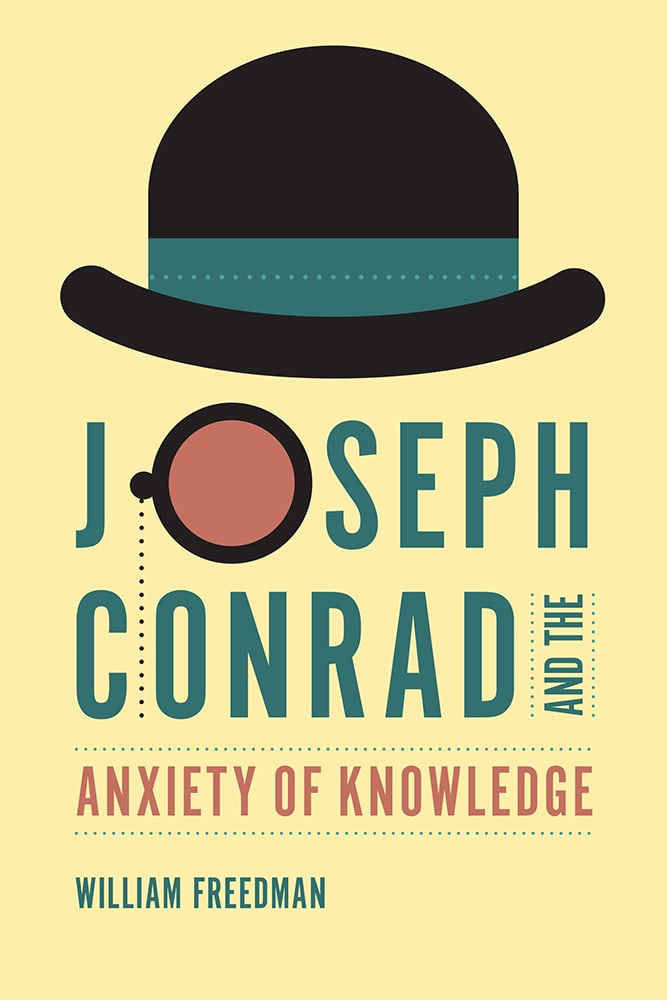 Joseph Conrad and the Anxiety of Knowledge

Few if any writers in the English language have been cited, praised, chided, or marveled at more routinely than Joseph Conrad for the perplexing evasiveness, contradictoriness, and indeterminacy of their fiction. William Freedman argues that the explanations typically offered for these identifying characteristics of much of Conrad's work are inadequate if not mistaken.

Freedman's claim is that the illusiveness of a coherent interpretation of Conrad's novels and shorter fictions is owed not primarily to the inherent slipperiness or inadequacy of language or the consequence of a willful self-deconstruction. Nor is it a product of the writer's philosophical nihilism or a realized aesthetic of suggestive vagueness. Rather, Freedman argues, the perplexing elusiveness of Conrad's fiction is the consequence of a pervasive ambivalence toward threatening knowledge, a protective reluctance and recoil that are not only inscribed in Conrad's tales and novels, but repeatedly declared, defended, and explained in his letters and essays.

Conrad's narrators and protagonists often set out on an apparent quest for hidden knowledge or are drawn into one. But repelled or intimidated by the looming consequences of their own curiosity and fervor, they protectively obscure what they have barely glimpsed or else retreat to an armory of practiced distractions. The result is a confusingly choreographed dance of approach and withdrawal, fascination and revulsion, revelation and concealment. The riddling contradictions of these fictions are thus in large measure the result of this ambivalence, their evasiveness the mark of intimidation's triumph over fascination.

The idea of dangerous and forbidden knowledge is at least as old as Genesis, and Freedman provides a background for Conrad's recoil from full exposure in the rich admonitory history of such knowledge in theology, myth, philosophy, and literature. He traces Conrad's impassioned, at times pleading case for protective avoidance in the writer's letters, essays, and prefaces, and he elucidates its enactment and its connection to Conrad's signature evasiveness in a number of short stories and novels, with special attention to The Secret Agent, Heart of Darkness, Lord Jim, Under Western Eyes, and The Rescue.


William Freedman is professor emeritus of English literature at the University of Haifa and a professor of English at Sakhnin College for Teacher Education in Sakhnin, Israel. Freedman is the author of Laurence Sterne and the Origins of the Musical Novel, The Porous Sanctuary: Art and Anxiety in Poe's Short Fiction, More Than a Pastime: An Oral History of Baseball Fans, and three books of poetry.

"Joseph Conrad and the Anxiety of Knowledge is a highly perceptive and compelling examination of underlying reasons for evasions, obscurities, and indeterminacies in Conrad's fiction. William Freedman sets his argument in the context of well-researched and clearly presented criticism on this subject, offering astute explanations for textual features that are central to Conrad's writing. The study's vivid and articulate prose makes it an engaging read as well."—Mark Larabee, U.S. Naval Academy, and author of Front Lines of Modernism: Remapping the Great War in British Fiction

"In Joseph Conrad and the Anxiety of Knowledge, William Freedman's views are unique and fill a gap in current scholarship on Conrad and knowledge. In addition, Freedman's approach to Conrad is clearly written and stylistically effective."—John G. Peters, University of North Texas, and author of Conrad and Impressionism, Joseph Conrad's Critical Reception, and The Cambridge Introduction to Joseph Conrad