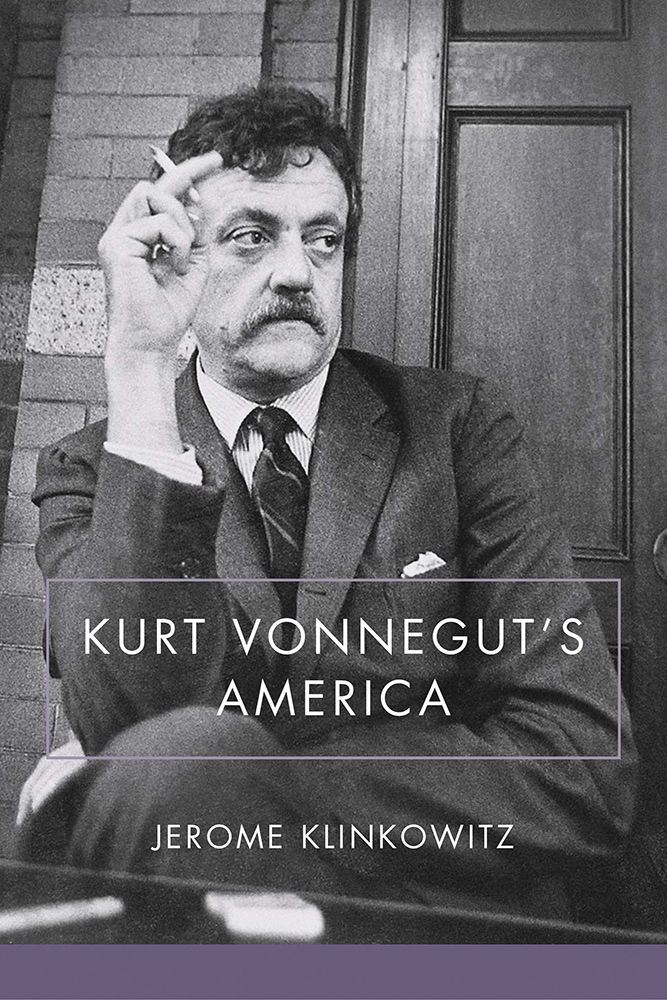 Kurt Vonnegut's death in 2007 marked the passing of a major force in American life and letters. Jerome Klinkowitz, one of the earliest and most prolific authorities on Vonnegut, examines the long dialogue between the author and American culture—a conversation that produced fourteen novels and hundreds of short stories and essays. Kurt Vonnegut's America integrates discussion of the fiction, essays, and lectures with personal exchanges and biographical sketches to map the complex symbiotic relationship between Vonnegut's work and the cultural context from which it emerged—and which it in turn helped shape.

Following an introduction characterizing Vonnegut as Klinkowitz came to know him over the course of their friendship, this study charts the impact of Vonnegut on American society and of that society on Vonnegut for more than a half-century to illustrate how each informed the other. Among his artistic peers, Vonnegut was uniquely gifted at anticipating and articulating the changing course of American culture. Kurt Vonnegut's America shows us that Vonnegut achieved greatness by passing his own test—opening the eyes of his audience to help them better understand their roles and possibilities in the common culture they both shared and crafted.

A pioneer in Vonnegut studies, Jerome Klinkowitz is the author of more than forty books, including novels, collections of short stories, studies of literature, philosophy, art, music, sports, and air combat narratives. He is a professor of English and University Distinguished Scholar at the University of Northern Iowa.

"No matter how familiar you are with the great author's canon, Kurt Vonnegut's America will have you pulling his books off the shelf again, eager to reread them, armed with new insights that could be provided only by the country's leading Vonnegut scholar. Here Klinkowitz provides a critical context for Vonnegut's output that is informed not only by his biography, but his reaction to, and shaping of, an ever-evolving American culture."—Robert Weide, director of Kurt Vonnegut: American Made and screenwriter of Mother Night

"In this wonderfully comprehensive book Jerome Klinkowitz offers a multifaceted view of a writer whose fifty-year career spanned the second half of the twentieth century. Descendant of Mark Twain and Will Rogers in his use of the American vernacular, anticipator of postmodern theorists in his interrogation of previously unchallenged assumptions, anthropologist in his lifelong concern with family structures and folk societies, and journalist in his address to the 'person from Indianapolis' that he always considered himself to be, the Kurt Vonnegut that emerges from these pages complicates all previous renderings of the author. That the writer who offers this portrait of the artist as a complex man is both a friend of thirty-six years as well as a critic for over thirty-six years only adds to the immense pleasures of this depiction."—Stacey Olster, professor of English, Stony Brook University

"In his tenth book on Kurt Vonnegut, Klinkowitz reads the writer and American culture as evolving in vivid conversation with one another. Klinkowitz writes both as Vonnegut's close friend and as founder of Vonnegut studies. The resulting work reverberates with the inviting elegance, unique authority, and impeccable rigor that only Klinkowitz could provide and which his subject deserves."—Christian Moraru, author of Memorious Discourse: Reprise and Representation in Postmodernism

"Blending personal recollection with biographical and critical commentary, Klinkowitz offers immediacy and unique insights in a book that feels like a farewell to an old friend. Kurt Vonnegut's America is a must for any Vonnegut enthusiast."—Peter J. Reed, professor emeritus of English, University of Minnesota

"No matter how familiar you are with the great author's canon, Kurt Vonnegut's America will have you pulling his books off the shelf again, eager to reread them, armed with new insights that could only be provided by the country's leading Vonnegut scholar. Here, Klinkowitz provides a critical context for Vonnegut's output that is informed not only by his biography, but his reaction to, and shaping of, an ever-evolving American culture. It's no wonder that Vonnegut himself was honored by Klinkowitz' academic interest, as well as his friendship. If the late author could read these pages, he'd surely say, 'If that isn't nice, what is?'"—Robert Weide, director of Kurt Vonnegut: American Made and screenwriter of Mother Night

"While writing from the perspective of a friend as well as a critic, Klinkowitz makes clear that Vonnegut never took his finger off the American pulse. He became more direct and hyperbolic in his formulations but, as Klinkowitz ably demonstrates, never strayed far from his oft-repeated ethos of artists as the canaries in the coalmine by reminding Americans of our highest ideals and taking us to task for our failures."—Bloomsbury Review