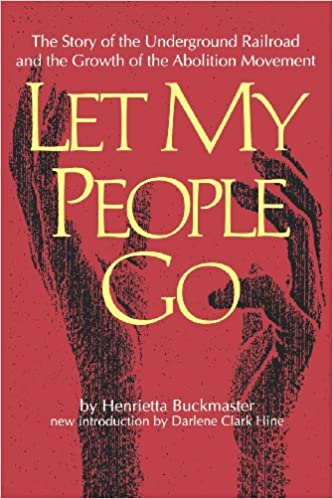 First published in 1941, Henrietta Buckmaster's Let My People Go remains the definitive account of the Underground Railroad, the Abolition Movement, and the African American struggle to be free. It is a synthesis of the momentous events that provoked a bloody Civil War and a turbulent Reconstruction. Center stage in this splendid narrative is the quest for freedom and the resistance this movement encountered. Buckmaster has captured with detail and passion the wide-ranging contemporary significance of this grand tale. While the views of such famous Abolitionists as Turner, Garrison, Stowe, Tubman, Douglass, and Brown are included, it is Buckmaster's own moral vision that infuses every line. The extensive research, the lyrical writing, and the sheer brilliance of her story telling make this an enduring work that, over fifty years after its publication, well deserves the designation "Southern classic."

The book opens with a chapter entitled "I Want To Be Free" and ends with "But We Haven't Found Peace," a description of the successes and failures of Reconstruction. Buckmaster considers the status of African Americans in our society as the best barometer of American democracy. Their struggle to be free is a compelling theme in her book, as it is in American history. Even after the demise of slavery, the reaction of white Southerners and the indifference of white Northerners prolonged the African American search for freedom and equality. Their perpetual quest has made the African American community a powerful mirror of the global human struggle against injustice and dehumanization.

Henrietta Buckmaster was born in 1909 in Cleveland, Ohio. During her prolific career as a novelist, book reviewer, and journalist, she wrote extensively for the Christian Science Monitor, the New York Sun, Harper's Bazaar, and the Saturday Review of Literature. A dedicated civil rights advocate, Buckmaster gained international recognition for her Afrocentric approach to slavery and the Abolitionist Movement with the publication of Let My People Go.