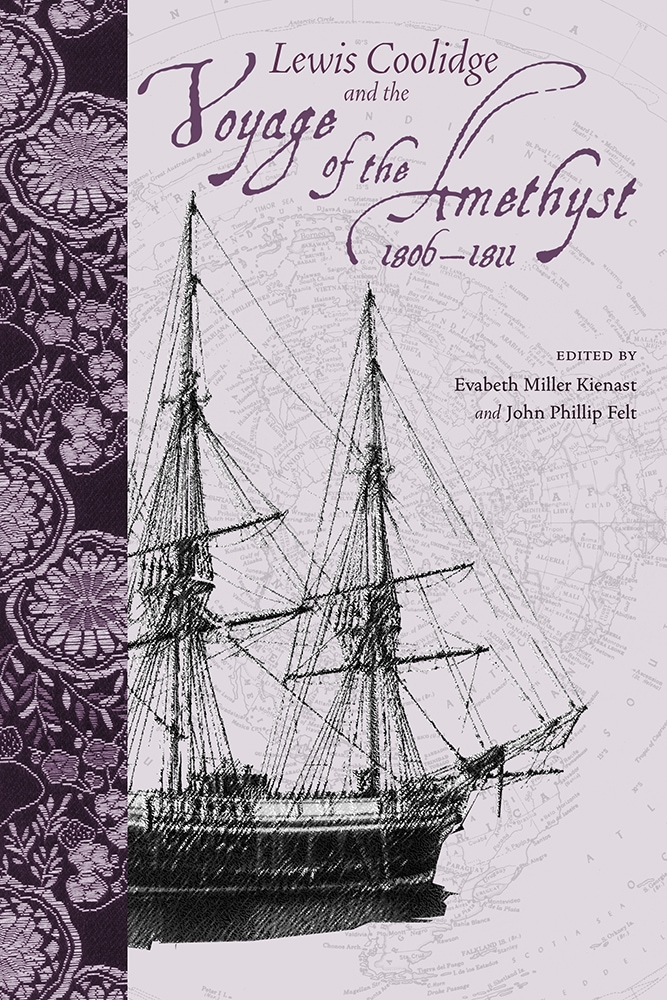 Lewis Coolidge (1783-1871) was a nephew of Billy Dawes, the man who accompanied Paul Revere on his legendary midnight ride. An adventurous spirit seems to have run in the family: in 1806 Coolidge set out on a five-year voyage around the globe aboard the China trader Amethyst. The crew's mission was to catch and skin fur seals to trade in China for tea, porcelain, silk, and other highly prized commodities while avoiding entanglements with European traders and ports unfriendly to the young American republic. Edited by Evabeth Miller Kienast and Coolidge's descendant John Phillip Felt, Coolidge's private diary of this voyage sheds light on the nineteenth-century sealing trade and offers a thoughtful vantage on maritime culture of the era as experienced by a highly literate Bostonian on the adventure of a lifetime.

The Amethyst sailed from Boston in September 1806 to Gough Island in the Antarctic, where a few men were dispatched to seal hunt as the ship continued around the horn to the Pacific Ocean. Coolidge was left in charge of a sealing party in the Cerros Islands off the coast of Spanish-controlled California while the ship returned to Gough. Almost a year later, the Amethyst finally retrieved Coolidge and his crew from the barren Cerros Islands, where they not only had to catch and skin seals but had to sustain themselves on whatever they could find. After more sealing off California, the Amethyst sailed next to the Hawaiian Islands and then on to China to trade the accumulated skins. The ship then sailed to the Palau Islands, where the crew obtained a cargo of sea cucumbers, a delicacy in China. The crew returned to China to sell this cargo and the ship itself, and then Coolidge and the others embarked for home on other vessels. With a keen eye, sharp wit, and a literary style reminiscent of Herman Melville, Coolidge ably chronicles all aspects of his odyssey in the diary published here for the first time.

Coolidge's well-annotated historical account is supplemented by eighteen illustrations, Felt's brief survey of the "Old China trade" enterprise, and his account of Coolidge's life following the voyage. Collectively these elements paint a vivid portrait of an adventurous era on the high seas and of a young man eager to find his way in the world.


A native of central Illinois, Evabeth Miller Kienast (1912–2007) was a reporter and arts columnist from 1934 to 1959 for the Peoria Star, where she worked with Lewis Coolidge's granddaughter, who first introduced her to his maritime diary.

"On a barren island in the Pacific in the early nineteenth century, Lewis Coolidge lived in a rock hut and read Shakespeare while engaged in the global trade in seal skins, bêche-de-mer, and other goods exchanged between China and the young United States. His employment was dangerous and isolating, but Coolidge proves a more-than-adept chronicler of early U.S. maritime life. Readers interested in nautical history and literature, as well as scholars in the growing field of oceanic studies, will benefit from this well-edited edition of Coolidge's absorbing journal."—Hester Blum, Penn State University, and author of The View from the Masthead: Maritime Imagination and Antebellum American Sea Narratives

"Coolidge's journal is a worthy companion to classic sea narratives such as Edmund Fanning's Voyages and Discoveries in the South Seas and sheds new light on the early American maritime trade to the Far East."—William N. Peterson, Carl C. Cutler Curator, Mystic Seaport