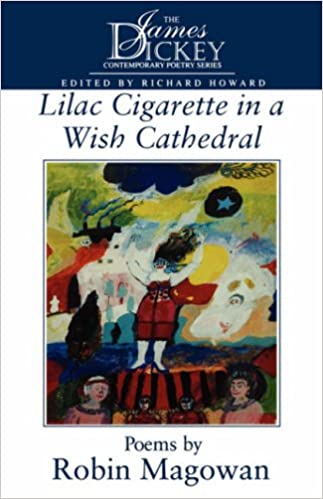 Lilac Cigarette in a Wish Cathedral

Robin Magowan's poems in Lilac Cigarette in a Wish Cathedral represent a poetry of heightened awarenesses and high-edge experiences caught on the run. Seized from a miniaturist's perspective, the subjects are privileged moments: a child mat-riding on a Red Flag day; birds in a tropical forest; Greek sailors dancing; a trek in the Himalayas; drug overdoses during an affair with a terrorist dragon lady; personal experiences that combine into an oeuvre and a life. Magowan's aim is to take the reader inside, as far as possible, using an instinctive notation to register his fascination with sensation, movement, and color. If it is mysticism—an awakening to the now—it is one that is happening line by line, and at times letter by letter, in a form that is lyrical, rhythm driven, and highly intensified.

Robin Magowan received a B.A. from Harvard, an M.A. from Columbia, and a Ph.D. in comparative literature from Yale. During the 1960s he taught at the University of Washington and the University of California at Berkeley. He moved to France in 1973, then to England in 1978, where in 1986 he founded the transatlantic review Margin, which he edited until 1990. The author of seven books of poetry, Magowan has also published a translation of Michaux's Ecuador; a study of the modern pastoral narrative, Narcissus and Orpheus; two collections of travel writing, And Other Voyages and Fabled Cities: Samarkand, Bukhara, Khiva; and two books on bicycle racing. He now lives in Salisbury, Connecticut, where he is working on his autobiography.

"The pages of this book are stamped as if with visas that represent Robin Magowan's extraordinary voyages and discoveries. He has explored the frontiers of the senses, the borders of the spirit, and returned with poems that seem to speak in tongues of what can and cannot be seen, can and cannot be understood. The result is a rare illumination."—J. D. McClatchy