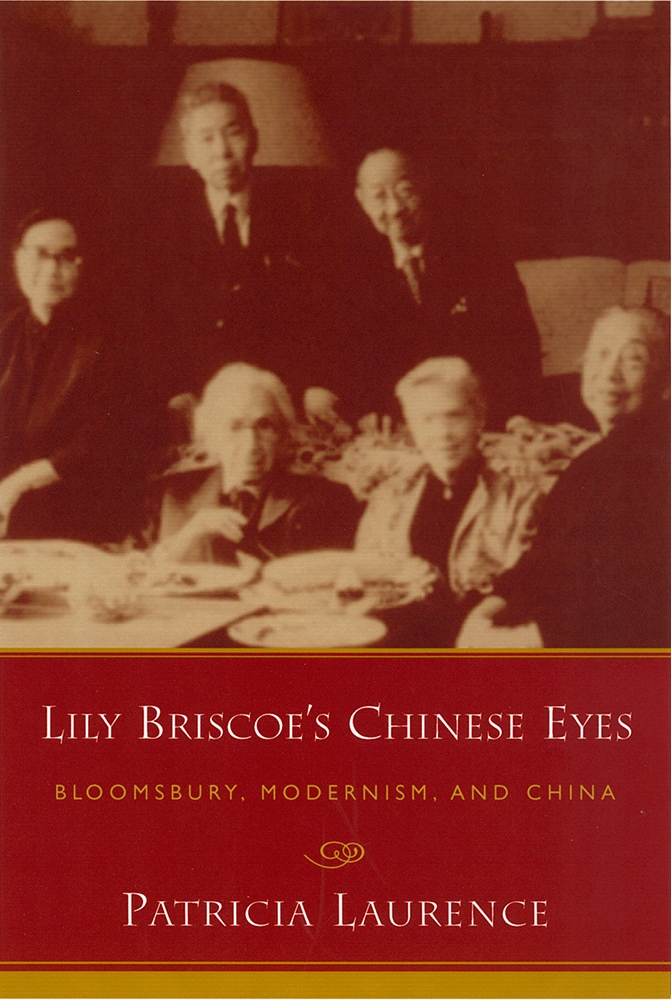 A map of the mutual influence of Bloomsbury, the Crescent Moon Society, and modernism in English and Chinese culture

Lily Briscoe's Chinese Eyes traces the romance of Julian Bell, nephew of Virginia Woolf, and Ling Shuhua, a writer and painter Bell met while teaching at Wuhan University in China in 1935. Relying on a wide selection of previously unpublished writings, Patricia Laurence places Ling, often referred to as the Chinese Katherine Mansfield, squarely in the Bloomsbury constellation. In doing so, she counters East-West polarities and suggests forms of understanding to inaugurate a new kind of cultural criticism and literary description.

Laurence expands her examination of Bell and Ling's relationship into a study of parallel literary communities—Bloomsbury in England and the Crescent Moon group in China. Underscoring their reciprocal influences in the early part of the twentieth century, Laurence presents conversations among well-known British and Chinese writers, artists, and historians, including Virginia Woolf, Vanessa Bell, G. L. Dickinson, Xu Zhimo, E. M. Forster, and Xiao Qian. In addition, Laurence's study includes rarely seen photographs of Julian Bell, Ling, and their associates as well as a reproduction of Ling's scroll commemorating moments in the exchange between Bloomsbury and the Crescent Moon group.

While many critics agree that modernism is a movement that crosses national boundaries, literary studies rarely reflect such a view. In this volume Laurence links unpublished letters and documents, cultural artifacts, art, literature, and people in ways that provide illumination from a comparative cultural and aesthetic perspective. In so doing she addresses the geographical and critical imbalances—and thus the architecture of modernist, postcolonial, Bloomsbury, and Asian studies—by placing China in an aesthetic matrix of a developing international modernism.


Patricia Laurence, a professor of English at the City College of New York, has also taught at Vassar College and Columbia University. She is the author of The Reading of Silence: Virginia Woolf in the English Tradition, and Lily Briscoe's Chinese Eyes extends her study of silence into the East and draws upon documents she encountered and interviews she conducted during her travels to China and England. Laurence lives with her husband in New York City.

"Laurence's book is required reading for anyone interested in modernism and postmodernism."—University Press Book Review

"Patricia Laurence has written a fascinating book that serves the growing interest in the literary and cultural relations between England and China. Here the emphasis is on the Bloomsbury writers and their neglected yet important intellectual relations with China as well as those of Chinese writers with England. Laurence tells the story of Julian Bell, Virginia Woolf's nephew and Vanessa Bell's son, so soon to die in the Spanish Civil War, and his affair with Ling Shuhua, a member of the Crescent Moon group (the Chinese 'Bloomsbury') and the wife of his dean at Wuhan University. Using this love story and Ling's later connections with Bloomsbury as the centerpiece of her study, Laurence investigates the cultural connections between the two countries, a colorful structure consisting of architecture, porcelain, and art, but mostly writers. It is a rich tale, told with critical acumen"—Peter Stansky, Department of History, Stanford University, and author of On or About December 1910: Early Bloomsbury and Its Intimate World

"Any Virginia Woolf lover and Bloomsbury fan would appreciate this exquisite narrative of careers and lives of the modern Chinese writers and poets whose Crescent Moon group paralleled the English group in time and spirit. Storytelling at its best, a sensitive account of romance between Julian Bell and Ling Shuhua adds flavor to how the Chinese and the English men and women of letters interacted."—Timothy Tung, retired, City College, City University of New York

"The cross-cultural voyage that Patricia Laurence has undertaken in this book is awesome. With immense scholarly detail and personal passion, Laurence maps aesthetic relationships between Bloomsbury and the Crescent Moon group in Beijing between 1900 and 1949. She criss-crosses brilliantly from letters and diaries to fiction and the visual arts, from biography to theory, and back again. This groundbreaking study urges us to draw a new map of international modernism appropriate to our own, fully globalized world."—Makiko Minow-Pinkney, author of Virginia Woolf and the Problem of the Subject