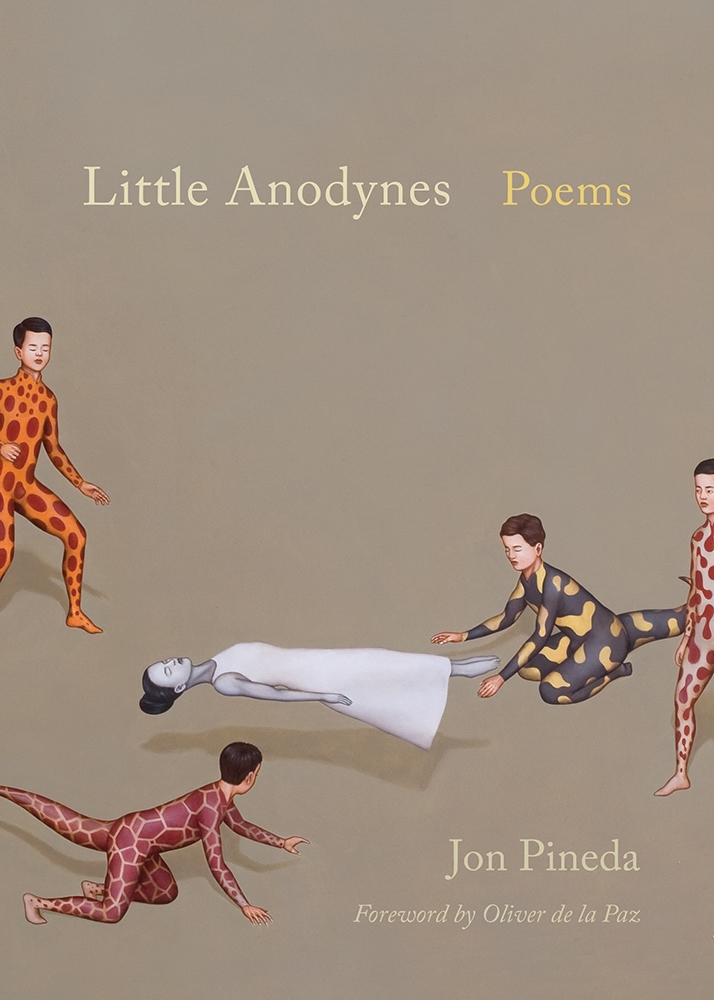 The third collection by the prize-winning Asian American poet Jon Pineda, Little Anodynes is a sequence of lyrical, personal narratives that continue Pineda's exploration of his biracial identity, the haunting loss of his sister, and the joys—and fears—of fatherhood. With its title inspired by Emily Dickinson, Little Anodynes offers its poems as "respites," as breaks in the reader's life that serve as opportunities for discovery and healing. Pineda deftly uses shortened lines and natural pauses to create momentum, which allows the poems to play out in a manner evocative of fine cinema, as if someone had left a projector running and these narratives were flickering and blending endlessly in an experience shared by the viewer, the storyteller, and the story itself.

Jon Pineda was born in Charleston, South Carolina, and raised in Chesapeake, Virginia. The recipient of a Virginia Commission for the Arts Individual Artist Fellowship, Pineda is the author of the novel Apology, winner of the Milkweed National Fiction Prize, and author of the memoir Sleep in Me, a Barnes & Noble "Discover Great New Writers" selection and a top memoir of 2010 by Library Journal. His poetry collections are The Translator's Diary, winner of the 2007 Green Rose Prize from New Issues Poetry & Prose, and Birthmark, selected by Ralph Burns as winner of the 2003 Crab Orchard Award Series open competition. An earlier version of Little Anodynes was a finalist for the National Poetry Series. Pineda teaches in the low-residency M.F.A. program at Queens University of Charlotte and at the University of Mary Washington. He lives in Virginia with his family.

Oliver de la Paz is the author of four collections of poetry: Names Above Houses, Furious Lullaby, Requiem for the Orchard, and Post Subject: A Fable. He is the co-editor of A Face to Meet the Faces: An Anthology of Contemporary Persona Poetry and co-chair of the Kundiman advisory board.

"Pineda has used his considerable skill with language and its manipulation to capture, evoke, and unleash the condition of fatherhood, showing its emotional density as a world no longer held / within language."—Literary Mama

"In the foreword, Oliver de la Paz calls the poems breathless ribbons of prose verse - and it's true, the way all these poems seem to be contained within one breath, narrow and taut, but what's also true is the way each of them renders you breathless with their acute knowledge of both pain and joy, suffering and salve. They knock the wind out of you, with the precision of each line, muted and raw, landing like the punch that will win the match."—Fjords Review

"Jon Pineda's Little Anodynes is a collection full of awe and great tenderness. Each prose poem presents a prismatic shard of memory, glancing across time from Pineda's wrenching recollections of his father to fleeting moments with his own children, where he exposes them to the wondrous details of the natural world. Little Anodynes is a sensuous and poignant read, filled with lustrous fragmentary scenes of sense and memory. Absolutely captivating."—Cathy Park Hong, author of Dance Dance Revolution and Engine Empire

"It's fitting that Jon Pineda's sublime Little Anodynes alludes to Emily Dickinson in the title, as the poems in this collection manage the same exceptional balance of awareness and wonder that permeates Dickinson's work. They are filled with the exquisite revelations of fatherhood, family, and the world pressing imminently, ominously, and achingly against them. Through Pineda's compassion, vision, and gift for unexpected language, we share those tenuous intersections where, as the speaker in 'Ellipses' says, we 'finally see all / is buried underneath our / short lived joy.'"—Adrian Matejka, author of The Big Smoke

"Poems of aching grace. . . . In Little Anodynes, Jon Pineda's resolute and lyrical language traverse the spectrum of human conditions and ease our lonely and troubled selves into the possibility of joy."—Oliver de la Paz, author of Post Subject: A Fable, from the foreword