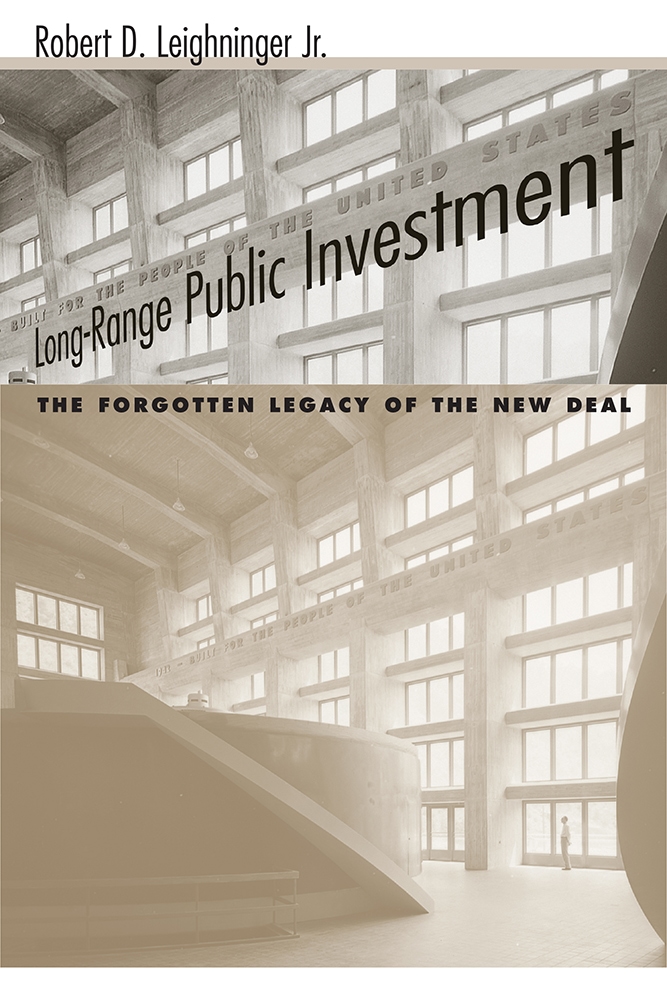 The Forgotten Legacy of the New Deal

A reassessment of the public works initiatives that built America's infrastructure

In this comprehensive survey combining architectural and social policy studies, Robert D. Leighninger Jr. reappraises the enduring achievements of public investment during the New Deal era. Leighninger argues that, though these initiatives produced the lasting backbone of the U.S. physical and cultural infrastructure, the value of these long-range investments is now being forgotten. In response Leighninger systematically assesses the schools, housing, bridges, roads, power plants, courthouses, hospitals, museums, stadiums, zoos, parks, and other public facilities built under the auspices of the New Deal. Many of the structures are still in use today.

Although a multitude of studies have focused on specific agencies, Leighninger offers an exhaustive survey of all the building agencies established as part of the New Deal. In addition to reviewing the large- and small-scale objectives of such operations as the Public Works Administration, Civilian Conservation Corps, Works Progress Administration, and Tennessee Valley Authority, Leighninger applies the New Deal experience to current public policy issues. He evaluates the impact of public works on stimulating the economy, the role of public jobs in a national employment policy, the means of financing infrastructure, and the paradox of viewing public works as "pork."

Leighninger concludes that the physical accomplishments of the New Deal have served as the core of the U.S. education, health, recreation, transportation, justice, and civic administration facilities for decades. These findings, he contends, will not only remind current generations of their indebtedness to the New Deal programs but also spark renewed debate about the long-range implications of public works versus pork barrel politics.

Long-Range Public Investment: The Forgotten Legacy of the New Deal is augmented by fifty-eight photographs.


Robert D. Leighninger Jr. has edited the Journal of Sociology and Social Welfare for more than twenty years, and he serves as a project adviser to the California New Deal Legacy Project. He is a sociologist at Arizona State University and the author of Community Assets: The Legacy of the Public Works Administration in Louisiana.

"Leighninger offers a superb introduction to the New Deal Public Works programs and succinctly describes the development and operations of the wide variety of projects. Spiced with inside information and sweetened with photographs and descriptions of successful projects, the book is a highly enjoyable and extremely informative read."—Price Fishback, New Deal specialist and professor of economics, University of Arizona

"Leighninger's lively, panoramic overview of Depression-era construction is a treasure trove for students and historians of America's New Deal. Exhaustively researched, this book provides a timely antidote to the passive strategies that have dominated more recent U.S. policymaking."—Gail Radford, author of Modern Housing for America: Policy Struggles in the New Deal Era