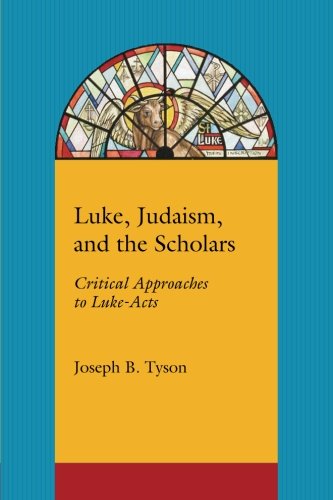 Luke, Judaism, and the Scholars

Sorting out what scholars say about Luke's characterization of the Jews

Joseph B. Tyson surveys the history of critical scholarship on the Gospel of Luke and the Acts of the Apostles and draws particular attention to the interpretation of Luke's treatment of Jews and Judaism. Noting that the Holocaust was a major turning point in the history of New Testament scholarship, Tyson demonstrates that the events of 1933-1945 have similarly influenced the study of Luke's writings. He suggests that, as the most perplexing of New Testament texts in its ambivalence toward Judaism, Luke-Acts has left scholars ample room for extrapolation on the question of how Luke meant to portray first-century Jews. In this volume Tyson traces the evolution of scholarly views of the text over the past two centuries.

Tyson explains that nineteenth-century scholars tended to portray first-century Judaism as moribund and casuistic but that, at the end of the twentieth century, scholars generally present the religion of this early period in a far more flattering light. He shows how Luke's mixed signals in Luke-Acts encourage both positive and negative portrayals. In what the text says about Jesus and his followers, there can be found instances of Jews who support the new messianic movement and of others who vigorously oppose it.


Joseph B. Tyson is a professor emeritus of religious studies at Southern Methodist University in Dallas. He received his Ph.D. from Union Theological Seminary and taught at SMU for forty years. He is a fellow of the Westar Institute's Acts Seminar, and he has served as chair of the Christian Scholars Group on Christian-Jewish Relations, sponsored by Boston College. Tyson's many books include Images of Judaism in Luke-Acts, The Death of Jesus in Luke-Acts, and Marcion and Luke-Acts: A Defining Struggle.

"Opening with a summary of anti-Judaism in Christian scholarship, exemplified by Ferdinand Weber, Wellhausen, Bousset, Schurer, and Bultmann, Tyson confirms the sociology of knowledge perspective that commentary is influenced by the culture in which it develops. He compellingly shows how late- nineteenth- and early-twentieth-century exposition recapitulated the prevailing negative views—derived from confessional apologetic, prejudice, and ignorance coupled with uncritical historiography and lack of access to primary Jewish sources—of 'late Judaism's' practice and theology, despite alternative constructions offered by Abraham Geiger and other Jewish scholars. This prevailing fabrication is then traced in the studies of the three major early scholars of Luke-Acts: Baur, Harnack, and Schlatter. . . . Tyson's work appears to show that any attempt to read Luke-Acts as 'pro-Jewish' is doomed. The question is thus not finally whether Luke-Acts is 'anti-Jewish' but rather first, how it displays its anti-Judaism, and second, how Christians come to terms with this depiction. For these issues, Tyson's publications are required reading."—Jewish Quarterly Review

"Tyson has produced an important book that many scholars, teachers, students, researchers, and non-specialists can use effectively and productively."—Review of Biblical Literature

"Luke, Judaism, and the Scholars surveys the history of critical scholarship on the Gospel of Luke and the Acts of the Apostles. Tyson draws particular attention to the interpretation of Luke's treatment of Jews and Judaism. . . . A splendid contribution to the growing body of New Testament scholarship focusing on the writings of Luke and the study of Christianity's Judaic roots."—America

"Tyson's informative and objective study contributes greatly to the history of modern biblical scholarship and warns that the prejudices of great scholars can sometimes have disastrous social consequences."—Bookwatch

"Tyson examines how critical scholars have dealt with the treatment of the Jews and Judaism in Luke's Gospel and Acts. . . . Since the literature on this topic is vast, Tyson provides a great service in summarizing and evaluating many of the most important works. For anyone who wants an orientation to this complex topic, this book is essential reading."—Religious Studies Review