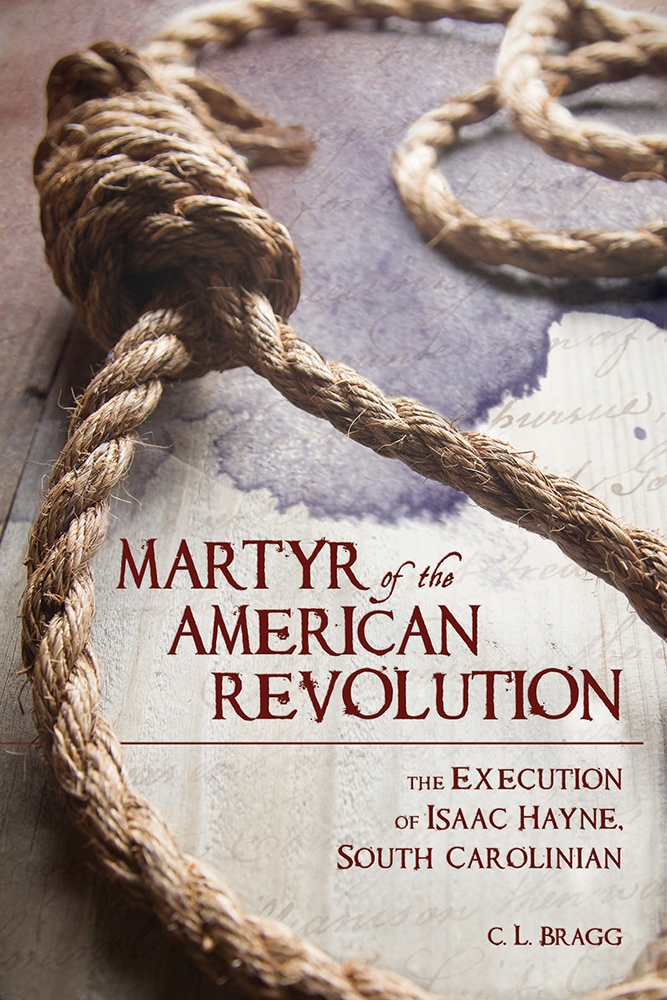 Martyr of the American Revolution

In 1781 South Carolina patriot militiamen played an integral role in helping the Continental army reclaim their state from its British conquerors. Martyr of the American Revolution is the only book-length treatment that examines the events that set an American militia colonel on a disastrous collision course with two British officers, his execution in Charleston, and the repercussions that extended from the battle lines of South Carolina to the Continental Congress and across the Atlantic to the halls of British Parliament.

On August 4, 1781, in Charleston, South Carolina, the British army hanged Col. Isaac Hayne for treason. Rather than a strict chronological retelling of the events, which led to his execution during the British occupation of Charleston, what is offered instead is a consideration of factors, independently set in motion that culminated in the demise of a loving father and devout patriot.

Hayne was the most prominent American executed by the British for treason. He and his two principal antagonists, Lt. Col. Nisbet Balfour and Lt. Col. Francis Lord Rawdon, were unwittingly set on a collision course that climaxed in an act that sparked perhaps the most notable controversy of the war. Martyr of the American Revolution sheds light on why two professional soldiers were driven to commit a seemingly wrongheaded and arbitrary deed that halted prisoner exchange and nearly brought disastrous consequences to captive British officers.

The death of a patriot in the cause of liberty was not a unique occurrence, but the unusually well-documented events surrounding the execution of Hayne and the involvement of his friends and family makes his story compelling and poignant. Unlike young Capt. Nathan Hale, who suffered a similar fate in 1776, Hayne did not become a folk hero. What began as local incident, however, became an international affair that was debated in Parliament and the Continental Congress.


C. L. "Chip" Bragg is a practicing anesthesiologist in Thomasville, Georgia. His lifelong passion for American history has resulted in three previously published books: Distinction in Every Service: Brigadier General Marcellus A. Stovall, C.S.A., the critically acclaimed Never for Want of Powder: The Confederate Powder Works in Augusta, Georgia, of which he is coauthor, and Crescent Moon over Carolina: William Moultrie and American Liberty.

"An excellent contribution to Revolutionary War scholarship, C.L. Bragg presents a thoroughly researched and fresh look at one of the most well-known, but heretofore not completely understood moments in South Carolina's past. Bragg offers an intriguing account of the events, principal actors, and legacy of the tragedy that was Isaac Hayne."—Carl P. Borick, director, Charleston Museum

"Although the British execution of South Carolina militia colonel Isaac Hayne in 1781 produced international repercussions at the time, both Hayne and the controversy surrounding his death have since languished in obscurity. Bragg refocuses needed attention on the importance of Hayne's execution in this tightly written, meticulously researched account of the incident."—Jim Piecuch, author of Three Peoples, One King: Loyalists, Indians, and Slaves in the Revolutionary South, 1775-1782

"The execution of South Carolina patriot Isaac Hayne was just one of the many atrocities that the British army of occupation committed in South Carolina. And, it had the opposite effect than what had been intended. Instead of cowing Carolinians, it infuriated and emboldened them. Anyone interested in trying to understand the American Revolution, especially the conflict in the South, will want to add Chip Bragg's book to their bookshelf."—Walter Edgar, author of Partisans and Redcoats: The Southern Conflict that Turned the Tide of the American Revolution

"Isaac Hayne was one of the most tragic figures of the American Revolution, but his story has remained obscure. Making extensive use of original source materials, C.L. Bragg reveals the very human story of a man who fell victim to forces in the war that were largely out of his control."—David Wilson, author of The Southern Strategy: Britain's Conquest of South Carolina and Georgia, 1775-1780

"Caught between the demands of his British captors and his fellow Whigs, Isaac Hayne was forced to make a difficult political choice that produced tragic consequences. Hayne has long deserved a historian as thorough and thoughtful as C. L. Bragg. In his sensitive examination of Hayne's dilemma and the motivations of British officials, Bragg has produced a book that is both riveting and definitive."—Greg Massey, Freed-Hardeman University

"Although mostly unknown and forgotten today, Hayne's case is another example of the lengths to which patriots will go when they feel their rights and liberty are threatened and certainly have no hesitation in sacrificing themselves for their country."—The Journal of America's Military Past