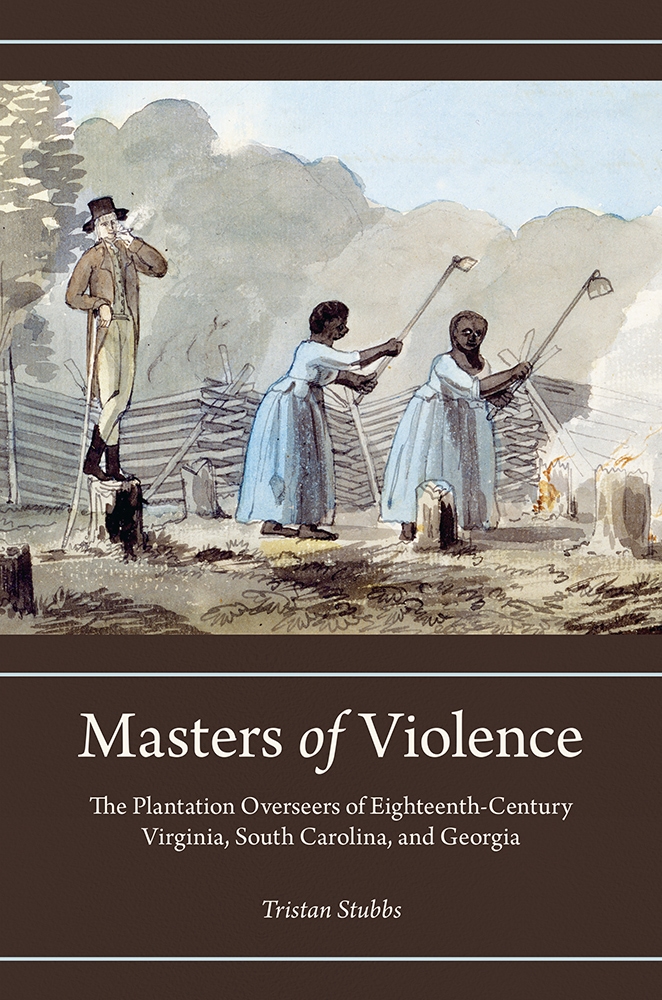 The Plantation Overseers of Eighteenth-Century Virginia, South Carolina, and Georgia

From trusted to tainted, an examination of the shifting perceived reputation of overseers of enslaved people

In the antebellum southern United States, major landowners typically hired overseers to manage their plantations. In addition to cultivating crops, managing slaves, and dispensing punishment, overseers were expected to maximize profits through increased productivity—often achieved through violence and cruelty. In Masters of Violence, Tristan Stubbs offers the first book-length examination of the overseers—from recruitment and dismissal to their relationships with landowners and enslaved people, as well as their changing reputations, which devolved from reliable to untrustworthy and incompetent.

At the beginning of the eighteenth century, slave owners regarded overseers as reliable enforcers of authority; by the end of the century, particularly after the American Revolution, plantation owners viewed them as incompetent and morally degenerate, as well as a threat to their power. Through a careful reading of plantation records, diaries, contemporary newspaper articles, and many other sources, Stubbs uncovers the ideological shift responsible for tarnishing overseers' reputations.

In this book, Stubbs argues that this shift in opinion grew out of far-reaching ideological and structural transformations to slave societies in Virginia, South Carolina, and Georgia throughout the Revolutionary era. Seeking to portray slavery as positive and yet simultaneously distance themselves from it, plantation owners blamed overseers as incompetent managers and vilified them as violent brutalizers of enslaved people.

"Masters of Violence: The Plantation Overseers of Eighteenth-Century Virginia, South Carolina, and Georgia is a solid work of scholarship, and even specialists in the field of colonial slavery will derive considerable benefit from reading it."—Journal of Southern History

"In this wonderfully sensitive study of plantation overseers in the eighteenth-century American South, Tristan Stubbs explains how these key intermediaries between profit-minded but paternalistic slave owners and brutalised enslaved people negotiated porous boundaries of dependency and autonomy. Masters of Violence is a major achievement, restoring the issue of class to societies riven by racial conflict."—Trevor Burnard, University of Melbourne

"Based on a detailed reading of overseers' letters and diaries, plantation journals, employer's letters, and newspapers, Tristan Stubbs has traced the evolution of the position of the overseer from the colonial planter's partner to his most despised employee. This deeply researched volume helps to reframe our understanding of class in the colonial and antebellum South."—Tim Lockley, University of Warwick

"Masters of Violence presents a detailed analysis of the changing role of the overseer and posits that the reputational violence associated with this class of worker led slaveholders to view them less favorably as plantation-based slavery continued into the nineteenth century."—Journal of American History

"Stubbs's work is a fine example of what historians can do when they work across the fractured lines of historiographical modes like "cultural," "political," and "social," and connect historiographies. The book is also well researched, both bringing to light new aspects on familiar sources but also resurrecting interesting ones that few current scholars have used."—The American Historical Review

"Masters of Violence is a fascinating study of an important and understudied topic and a valuable addition to the scholarship of eighteenth-century plantations."—Maryland Historical Magazine