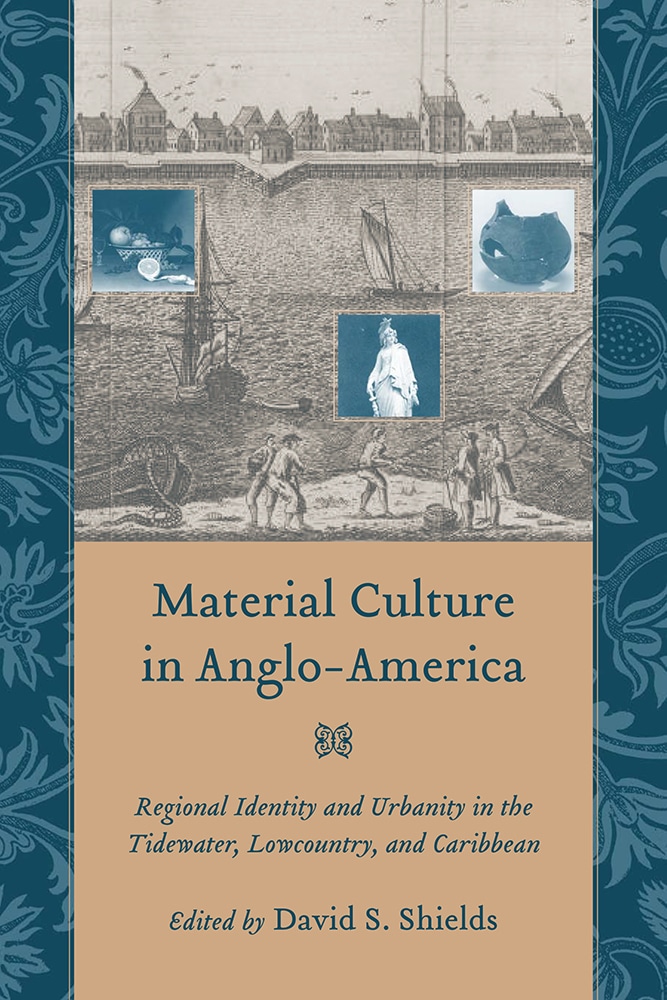 Regional Identity and Urbanity in the Tidewater, Lowcountry, and Caribbean

Material Culture in Anglo-America examines the extent to which regions project cultural identities through the material forms of objects, buildings, and constructed environments. Utilizing more than 130 illustrations and essays by scholars representing a variety of disciplines, this volume explores the material constitution of the West Indies, Carolina lowcountry, and Chesapeake Tidewater—three historically related regions that shared strong likenesses in culture, commerce, and political development in the colonial through antebellum eras, yet also cultivated the distinctive regional flair with which they are now associated. Without reducing regionality to iconic signatures of place, the essays in this volume explore broadly the built and crafted artifacts that define and confine cultural identity in these geographic areas, locating regionality in the distinctive uses of objects as well as in their design and creation.

The contributors—an impressive and international array of historical archeologists, art historians, literary historians, museum curators, social historians, geographers, and historians of material culture—combine theoretical reflections on the poetics of representative material culture with empirical studies of how things were made and put to use in specific locales. They argue that there was a "presence of place" in the built environments of these regions but that boundaries were imprecise. The essays illustrate how the material culture of urban and rural settings interpenetrated each other and discuss the complications of class, race, religion, and settler culture within developing regions to reveal how all of these factors influenced the richness of crafted artifacts. The study is further grounded in several striking case studies that dramatically demonstrate how constructed things can embody communal self-understanding while still participating in an overarching transatlantic cultural community. In addition to Shields, the contributors are Benjamin L. Carp, Bernard L. Herman, Paul E. Hoffman, Laura Croghan Kamoie, Eric Klingelhofer, Roger Leech, Carl Lounsbury, Maurie D. McInnis, Matthew Mulcahy, R. C. Nash, Louis P. Nelson, Paula Stone Reed, Jeffrey H. Richards, Natalie Zacek, and Martha A. Zierden.


David S. Shields is the McClintock Professor of Southern Letters in the Departments of English and History at the University of South Carolina, editor of the journal Early American Literature, and director of the Southern Texts Society. He is the editor of American Poetry: The Seventeenth and Eighteenth Centuries in the Library of America series and the author of Civil Tongues and Polite Letters in British America and Oracles of Empire: Poetry, Politics, and Commerce in British America, 1690–1750.

"Material Culture in Anglo-America opens a wide-ranging discussion concerning the tangible assets that were used to shape an Atlantic community during the seventeenth and eighteenth centuries. A strong cast of scholars from diverse but related fields offers useful perspectives aimed at recovering the sense of place and presence as colonial outreach gave rise to a new regional identity. Offering a view from within a range of colonial locations, this volume demonstrates how the process of local creolization problematized triumphal nationalist claims."—John Michael Vlach, professor of American studies and of anthropology, George Washington University

"This volume is an important contribution to the study of British-American culture in the Lower South and the British Caribbean. It expands our understanding of the links between mainland and islands, enslaved and free, and people and things. Complex, richly textured, and thoughtful, it will become a starting point for those who study the region and our material past."—J. Ritchie Garrison, director, Winterthur Program in American Material Culture, University of Delaware

"Scholars of early America often ask questions framed by broad economic regions. But how did someone actually experience a region? Is there a readable pattern in objects and spaces when environment, identity and cultural association create a true presence of place? Editor David Shields argues that material culture has the answers as sixteen scholars masterfully probe archaeology, architecture, urban fabric, household possessions and art objects in three similar but distinctive areas hugging the Atlantic. This excellent collection of essays provides important and timely ways of linking regional and global histories and shows how local sensibilities navigated within a general ethos—the essence of colonial relationships."—Ann Smart Martin, Stanley and Polly Stone Associate Professor and director of Material Culture Program, University of Wisconsin–Madison