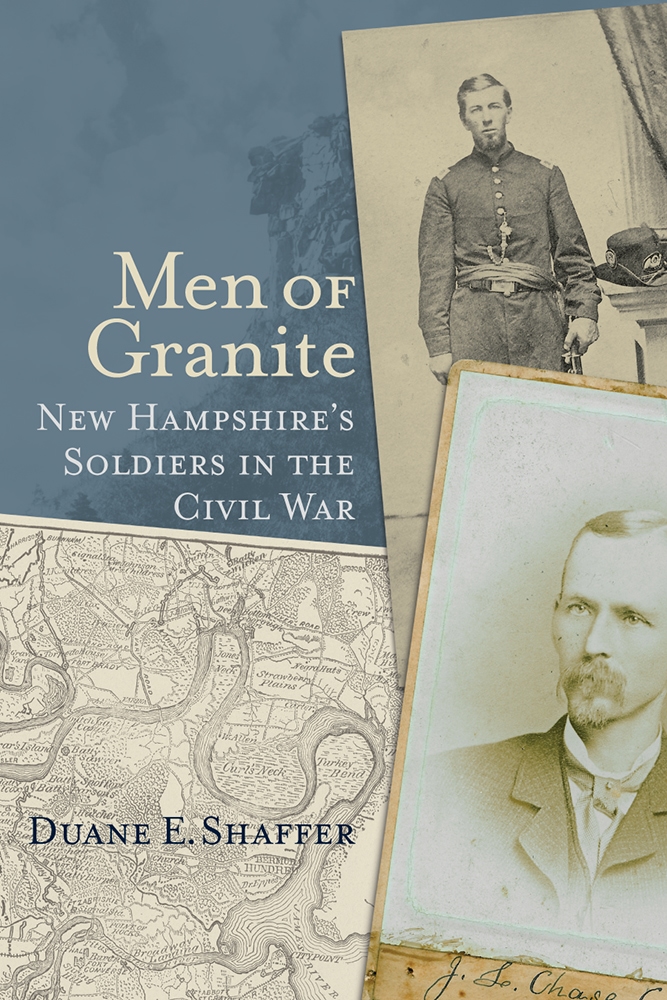 A chronicle of Civil War service by Granite State soldiers in Pennsylvania, Virginia, and South Carolina

During the Civil War, some thirty-five thousand New Hampshire soldiers—representing approximately 11 percent of the state's population—were dispatched to serve the Union in seventeen infantry regiments, two cavalry regiments, three artillery batteries, and three companies of sharpshooters and as members of miscellaneous naval and marine units. Duane E. Shaffer tells the story of these forces in Men of Granite, a thorough history of New Hampshire combat troops in the years before and during the Civil War. Focusing on the day-to-day experiences of the common soldier and his reasons for taking up the fight against the Confederacy, Shaffer has mined myriad primary sources to draw together the experiences of all of the state's regiments and units into this single, cohesive narrative.

Told in chronological order, Shaffer's narrative follows the experiences of New Hampshire troops, primarily in Virginia and South Carolina. Granite State soldiers were stationed at Hilton Head for much of the war, and they offered vivid accounts of bivouac duty and of inland raids in lowcountry South Carolina. The soldiers also fought in major battles such as Manassas, Antietam, Gettysburg, and Cold Harbor. A chapter each is devoted to the Battle of Fredericksburg in December 1862, a fight that included the largest concentration of New Hampshire soldiers in the war, and the Battle of Chancellorsville in May 1863, in which the Twelfth New Hampshire suffered more casualties than any regiment on either side. Shaffer also details the disaster of the Battle of Fort Wagner in July 1863, in which New Hampshire lost more soldiers than in any other operation. He also follows his subjects' return after the war to recount their homecoming and to cement understanding of their sacrifice.

Further enhanced by twenty illustrations and twelve maps, Shaffer's detailed survey reinserts the story of New Hampshire forces into the annals of Civil War history and, through frequent quotation of soldiers' own accounts, gives voice to the motivations and daily experiences of determined Union forces from the Granite State.


Duane E. Shaffer is a cofounder of the Civil War Round Table of New Hampshire. A library director in the state of New Hampshire for twenty years, he is currently head of collection development for the Sanibel Public Library in Sanibel, Florida.

"Focusing primarily on the heroics and hardships of those in uniform, Shaffer has mined a sizable sampling of original diaries and letters to present the most ambitious single-volume account yet of all New Hampshire's Civil War soldiers, with a few sailors' tales thrown into the bargain."—William Marvel, author of Lincoln's Darkest Year: The War in 1862