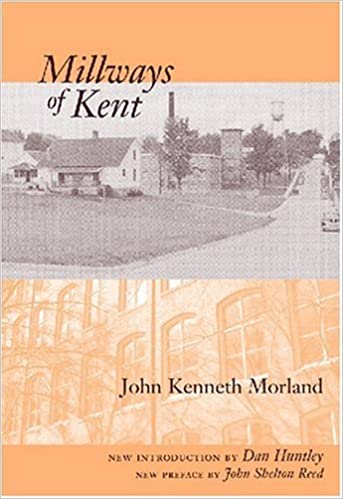 The Kent Trilogy, consisting of Blackways of Kent (1955), Millways of Kent (1958), and the previously unpublished Townways of Kent, forms a remarkable southern ethnography that maps the social stratification of the Piedmont mill town of York, South Carolina, in the late 1940s, after the effects of the Great Depression and preceding the coming civil rights era. In 1946 the University of North Carolina's Institute for Research in Social Science commissioned a series of southern community studies under the direction of anthropologist John Gillin from which these volumes resulted.

In Millways of Kent John Kenneth Morland's skill as an oral historian and his fundamental respect for his blue-collar subjects allowed him to describe the anonymous textile mill workers of York as sympathetic, three-dimensional human beings, something more than their insular white neighbors in the town of York might have viewed them as. Morland discovered that the segregation of poor white mill workers from the existing town of York mirrored the experiences of early waves of European immigrants as they settled in established American cities. The plight of working families in the mill village, their daily joys and disappointments, and the governing call of the mill whistle are all brought vibrantly to life through Morland's words, creating a powerfully detailed snapshot of an American subculture that no longer exists.

This Southern Classics edition is expanded with a new preface by John Shelton Reed on the origins and impact of the Kent Trilogy and a new introduction by Dan Huntley assessing the lasting importance of Morland's telling case study. The volume is further supplemented with a 1995 interview with Morland and his wife detailing their experiences with the "Kent" research and including photographs from the period.


John Kenneth Morland (1916–2005) was a professor of sociology at the University of North Carolina at Chapel Hill and Randolph-Macon Women's College in Lynchburg, Virginia.

The son of a York textile mill owner, Dan Huntley is a columnist for the Charlotte Observer.

John Shelton Reed is the William Rand Kenan Jr. Professor Emeritus of sociology at the University of North Carolina at Chapel Hill, where he was director of the Howard Odum Institute for Research in Social Science and cofounder of the Center for the Study of the American South.