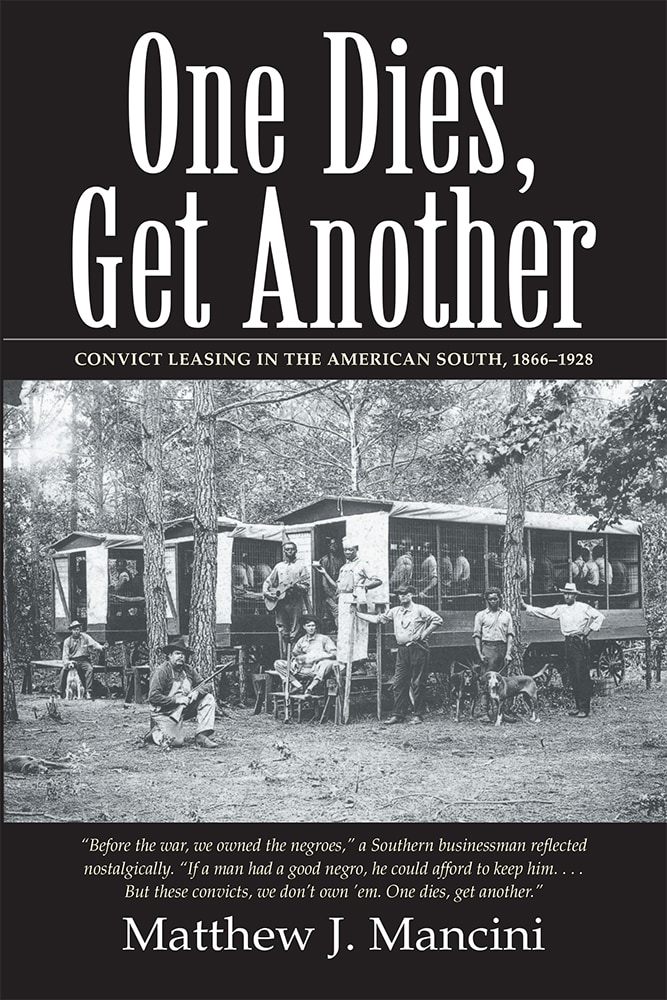 One Dies, Get Another

A chronicle one of the harshest, most exploitative labor systems in American history

In his seminal study of convict leasing in the post-Civil War South, Matthew J. Mancini chronicles one of the harshest, most exploitative labor systems in American history. Devastated by war, bewildered by peace, and unprepared to confront the problems of prison management, Southern states sought to alleviate the need for cheap labor, a perceived rise in criminal behavior, and the bankruptcy of their state treasuries. Mancini describes the policy of leasing prisoners to individuals and corporations as one that, in addition to reducing prison populations and generating revenues, offered a means of racial subordination and labor discipline. He identifies commonalities that, despite the seemingly uneven enforcement of convict leasing across state lines, bound the South together for more than half a century in reliance on an institution of almost unrelieved brutality.

He describes the prisoners' daily existence, profiles the individuals who leased convicts, and reveals both the inhumanity of the leasing laws and the centrality of race relations in the establishment and perpetuation of convict leasing.

In considering the longevity of the practice, Mancini takes issue with the widespread notion that convict leasing was an aberration in a generally progressive history of criminal justice. In explaining its dramatic demise, Mancini contends that moral opposition was a distinctly minor force in the abolition of the practice and that only a combination of rising lease prices and years of economic decline forced an end to convict leasing in the South.


Matthew J. Mancini is chair of the Department of History at Southwest Missouri State University. He is the author of Alexis de Tocqueville and coeditor of Understanding Maritain.

"Anyone who calls himself a student/scholar of the 'New South,' the Post Reconstruction South, or the post-Civil War South will have to read this book."—Mark T. Carleton, Louisiana State University

"An important study of the rise, operation, and abandonment of convict leasing in the South from the end of the Civil War to the early twentieth century, detailing its political, cultural, and economic impacts. Based on extensive primary research, it provides a state-by-state examination of this means of labor control, one that became important to the southern adjustment to the end of slavery. It is essential reading for all concern with southern history, black history, and the history of penal institutions."—Stanley L. Engerman, University of Rochester