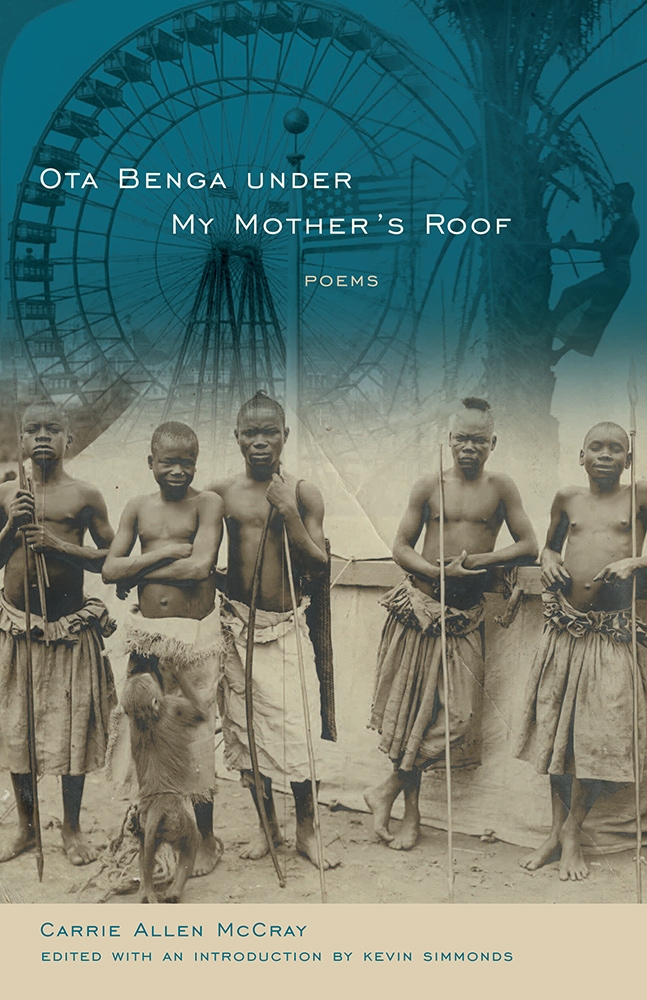 Ota Benga under My Mother's Roof

Carrie Allen McCray
edited with an introduction by Kevin Simmonds

In Ota Benga under My Mother's Roof, Carrie Allen McCray (1913-2008) uses poignant and personal verse to trace the ill-fated life of the Congolese pygmy who was famously exhibited in the Bronx Zoo in 1906 before being taken in by the McCray family of Lynchburg, Virginia. Rooted in the rich historical and autobiographic context of her own experiences with Benga, McCray offers compelling, dexterous poems that place Benga's story within the racial milieu of the early twentieth century as the burgeoning science of social anthropology worked to classify humans based on race and culture. The theme of this book is a study of humanity, of people of all kinds, in which Benga's vitality becomes the measure against which everyone is measured. With poems that revel in African American signifying, spirituality, and traditional storytelling, McCray's collection establishes a sincere legacy for Ota Benga as she shares her friend's harrowing tale with new generations.

Born in Lynchburg, Virginia, Carrie Allen McCray was an educator and social worker before turning to writing later in life. McCray is the author of Freedom's Child: The Life of a Confederate General's Black Daughter, which details her discovery that her mother was the child of a Confederate general and his black servant. McCray is the author of the poetry chapbook Piece of Time, and her poems have been published in Ms. Magazine, River Styx, Point, and the Squaw Review, and in the anthologies Moving beyond Words and The Crimson Edge: Older Women Writing.

Kevin Simmonds is a writer, musician, and filmmaker originally from New Orleans. He is the author of Mad for Meat and editor of Collective Brightness: LGBTIQ Poets on Faith, Religion & Spirituality. Simmonds's collaborations include the Emmy Award–winning documentary HOPE: Living and Loving with HIV in Jamaica and Voices of Haiti: A Post-Quake Odyssey in Verse, both commissioned by the Pulitzer Center. His genre-defying films include Singing Whitman and feti(sh)ame. He divides his time between San Francisco and Japan.

"From the deep forests of the Congo, to the black churches of Virginia, to the steel cages of the Bronx Zoo, to the hearth of the McCray household, Ota Benga wished only to be seen as a man. When we read Carrie Allen McCray's beautiful, haunting poems, we share her great empathy and devotion to sharing the life of another human being once here, but now gone. This is a story about humanity, cultural differences, the beginnings of anthropology, the middle of racism, and how sweetly we used to take each other in and care for the stranger walking the earth just as we cared for our own. McCray carried Ota Benga in her head and heart until she was ready to craft his cautionary tale into something truly wonderful. Now it is our turn to bear this story, to remember who we are, and to act as who we wish to be."—Nikky Finney, National Book Award winner for Head Off & Split

"In a narrative that moves like a classical tragedy, Ota Benga is 'caught in a web / of flawed science,' but emerges as a complex and real figure, a man out of time, out of place, whose dignity and humanity have left us with a harrowing story shared here by one who knew him best. Carrie Allen McCray weaves a rich tapestry in this cultural epic. We hear African rhythms and tribal voices, we encounter poems that seem like plays and chants and rituals and journal excerpts, and we witness the 'birth of anthropology' with an awful, embedded racism in its infancy. In McCray's loving portrait of Ota Benga, we come to relish the small touches as much as the large ones—the landscape of turn-of-the-century Virginia, the manners of folks at work and play, the sense of tribal and familial loyalty, and the voices that accumulate into a cultural symphony, sometimes broken into grief, sometimes sustained by joy."—David Baker, poetry editor, Kenyon Review