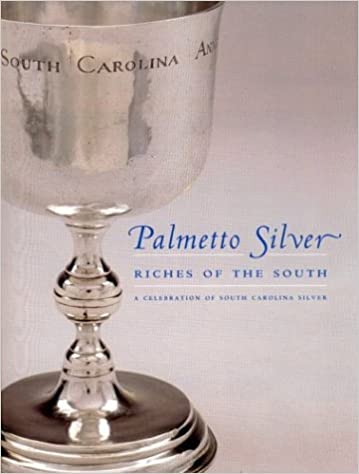 Riches of the South : A Celebration of South Carolina Silver

Palmetto Silver is the first publication in more than a dozen years to showcase the riches of South Carolina silve r. While silver is a precious metal that can quickly be converted to currency, it has a much more significant cultural value. From utilitarian flatware to decorative trophies, the many pieces included in this book provide an intriguing picture of the individuals and history connected with the crafting of silver wares in the Palmetto State.

Based on a 2002 exhibition by the same name at the University of South Carolina's McKissick Museum, Palmetto Silver is the result of several years of research and draws heavily on items from private collections throughout the South. While much of the previous research has concentrated primarily on Charleston silver made prior to the Civil War, the silver featured in this book highlights the work of South Carolina craftsmen from colonial times to the twentieth century. Although many historians previously theorized that most silver items used in the South were imported from merchants and workshops in New England or even from Great Britain, Palmetto Silver presents recent findings that indicate there were many highly skilled silversmiths working throughout the state during the eighteenth and nineteenth centuries.

An introductory essay by Rodger Stroup, director of the South Carolina Department of Archives and History, sets the historical context for these objects and provides insight into the important role they had in society. Palmetto Silver includes a comprehensive listing of 216 objects, 69 color images, a directory of silversmiths and merchants, and an illustrated listing of makers' marks. Among the diverse array of objects included and illustrated are military swords, shotguns, walking canes, tea services, award trophies, and presentation pieces. One outstanding example of featured craftsmanship is a hand-chased cream or milk pitcher that was presented to the city of Columbia's African American fire brigade in 1846. Palmetto Silver is a treasure trove of such artifacts.


McKissick Museum was established in 1976 to provide campus and community access to the University of South Carolina's extensive history, art, and science collections, which originated in 1823 with the purchase of the collections of Thomas Cooper, the noted professor, scholar, and then president of the university. In the twentieth century the university broadened its collecting to include fine, decorative, and folk arts. In recent years the museum has received numerous awards for its multidisciplinary projects, and its collections have grown to more than 100,000 objects making it one of the largest university museums in the Southeast.