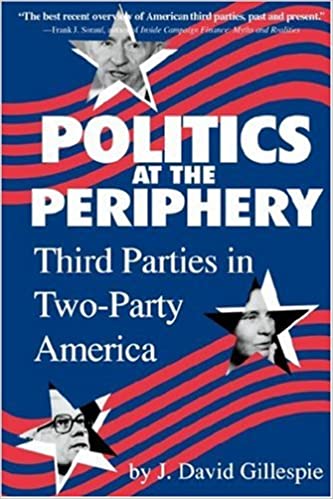 Politics at the Periphery

At a time when voter frustration with "politics as usual" promises to be the hallmark of the 1990s, J. David Gillespie reminds us that American receptiveness to candidates outside the Republican and Democratic parties is not a phenomon unique to this decade. Rather, alternative parties are an American tradition almost as old as the nation itself. Gillespie's broad, interpretive study tells the story of those Americans who have rejected traditional parties for alternative political organizations and the issues that have motivated them to do so.

Gillespie examines the value of third parties as well as the cultural and structural constraints that relegate them to the periphery of American political life. From the Antimasons of the 1820s to H. Ross Perot's grassroots network, Gillespie details more than fifty political alternatives. He offers vivid portraits of third-party leaders and supporters, including Tom Watson, Robert LaFollette, Strom Thurmond, George Wallace, Belva Lockwood, and Huey Long. Assessing their constituency and impact, Gillespie concludes that third parties draw disproportionately from the ranks of agitators and act as agents for change, with many stances adopted—often in modified form—by mainstream parties.

J. David Gillespie is professor of political science and former department chair at Presbyterian College. He earned his B.A. and M.A. at Wake Forest University and his Ph.D. at Kent State University. Gillespie has written extensively on third-party politics.

"A valuable introduction to an often neglected feature of party politics in America."—Earl Black, co-author of The Vital South: How Presidents are Elected