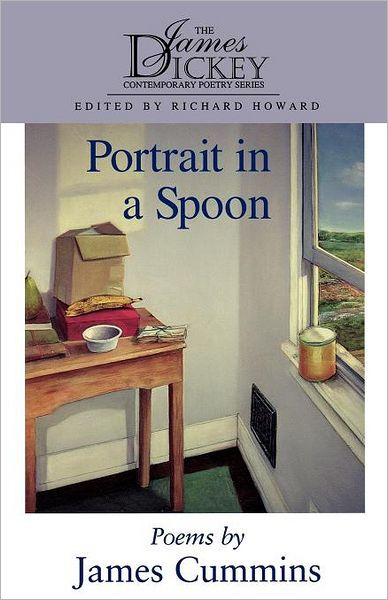 Portrait in a Spoon

By turns comic and poignant, the poems in Portrait in a Spoon explore the uses and abuses of language as it intersects the uses and abuses of power. Taking George Eliot's observation that even Milton, looking at himself in a spoon, would have to "submit to have the facial angle of a bumpkin," James Cummins investigates the question of identity—the illusions we sustain, the passions we conceal, and the stories that surround both.

In his previous collection, The Whole Truth, Cummins rewrote to absurd and magisterial ends the Perry Mason saga. In this much-awaited second volume of poems, he again trains his eye on culture—high and low, popular and elite—to explore and explode the myths and mythos of making. He finds the spoon that encloses and discloses, like John Ashbery's mirror, distorts as it explains. It has its analogue in the closed forms that he masterfully employs here: the epigram, sonnet, villanelle, and sestina. Through them he informs, measures, and sustains cascades of deep (and sometimes menacing) feeling.

Cummins also experiments with different strategies—free verse as well as formal. The resulting three-part work is not a triptych, not the presentation of the finished story, but a journey in language through the story's making.


James Cummins was born in Columbus, Ohio, and grew up in Cleveland and Indianapolis. He is curator of the Ellison Poetry Collection at the University of Cincinnati, where he also teaches. His first volume of poems, The Whole Truth was published in 1986.

"As always, James Cummins's poems are dazzlingly inventive, but these new poems are something more as well—they are deeply felt and deeply moving."—Susan Wood