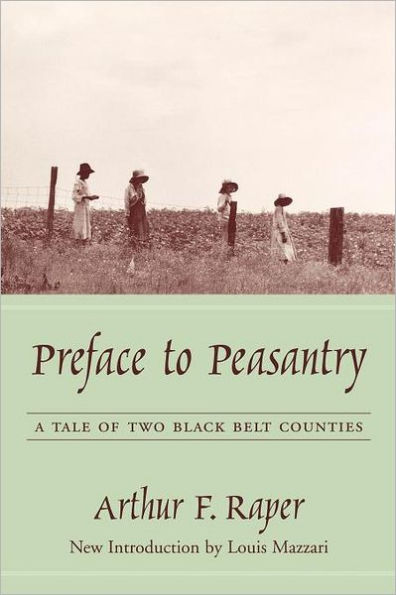 A social scientist and public intellectual, Arthur Raper (1899-1979) advocated unpopular solutions to combat the shortcomings of race relations and economic stagnation in the South. Originally published in 1936, Preface to Peasantry confirmed Raper's place in the Chapel Hill Southern Regionalist movement of the 1930s and 1940s and elaborated his belief that New Deal federal planning could create progressive social policies.

The result of a seven-year investigation into social and economic stress in Georgia marked by African American emigration from the rural South to northern and New South cities, Raper's work focuses on the agricultural depression of Greene County, Georgia, bereft of farmable soil and with a rapidly declining black population, and the contrasting economic stability of Macon County, Georgia, where the land remained fertile and the population had not suffered significant upheaval. Arguing that the plantation system had taught African Americans only dependence and irresponsibility, Raper warned that, without social programs that materially altered the South's racial and economic policies, the course of events in Greene County and similar communities would drive African American tenant farmers and sharecroppers into a permanently subjugated peasant class.

Adroitly juxtaposing themes of history and sociology, Preface to Peasantry is a text both descriptive of a broad phenomenon and prescriptive of policymaking to address the destruction of rural American life. This edition features a new introduction from Louis Mazzari to contextualize Raper's life and writings.


Arthur F. Raper distinguished himself in academics and service at the University of North Carolina and Vanderbilt University before beginning his work in Georgia at the invitation of the Commision on Interracial Cooperation. He is also the author of The Tragedy of Lynching, Sharecroppers All, and Tenants of the Almighty.

Louis Mazzari is an assistant professor of American studies in the Department of American Culture and Literature at Fatih University in Istanbul. He is the author of the book Arthur Raper: A Modern Realist in the New Deal South.

"[Preface to Peasantry] is part of a growing literature reflecting the development of a social movement, analogous to the abolitionist movement before the Civil War, which has the small farm as its goal. . . . [I]t aims at the destruction of the plantation, the physical basis of slavery, and of cropper tenancy itself."—American Journal of Sociology

"Raper writes as the research and field secretary of the commission on interracial cooperation. . . .[H]is study ranks among the most fundamental contributions to the sociology of the rural South."—American Sociological Review