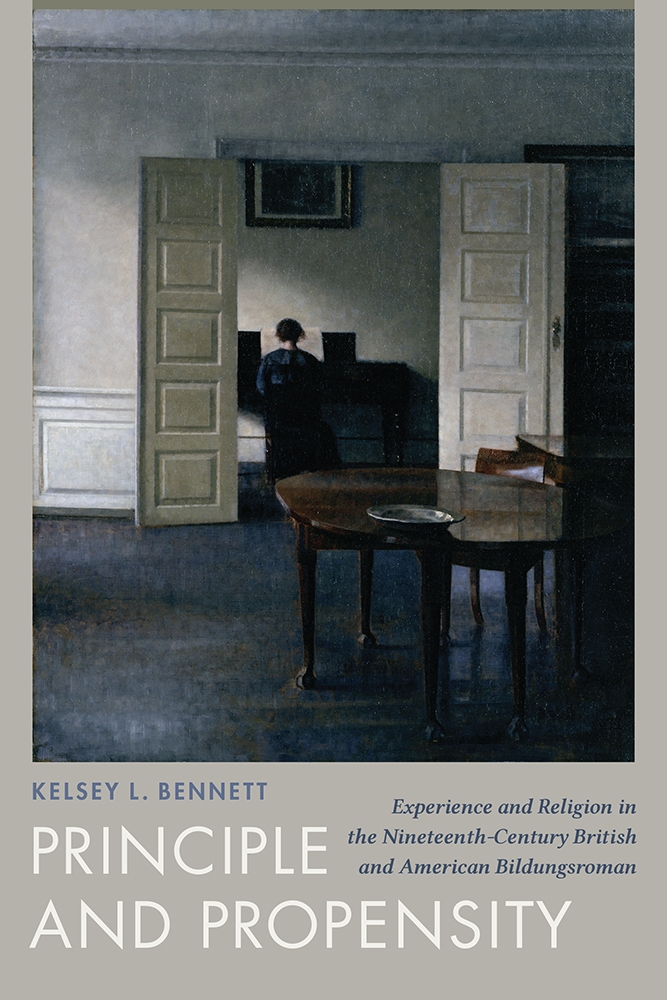 Experience and Religion in the Nineteenth-Century British and American Bildungsroman

Scholars have traditionally relied upon the assumption that the nineteenth-century bildungsroman in the Goethean tradition is an intrinsically secular genre exclusive to Europe, incompatible with the literature of a democratically based culture. By combining intellectual history with genre criticism, Principle and Propensity provides a critical reassessment of the bildungsroman, beginning with its largely overlooked theological premises: bildung as formation of the self in the image of God. Kelsey L. Bennett examines the dynamic differences, tensions, and possibilities that arise as interest in spiritual growth, or self-formation, collides with the democratic and quasi-democratic culture in the nineteenth-century British and American bildungsroman.

Beginning with the idea that interest in an individual's moral and psychological growth, or bildung, originated as a religious exercise in the context of Protestant theological traditions, Bennett shows how these traditions found ways into the bildungsroman, the literary genre most closely concerned with the relationship between individual experience and self-formation.

Part 1 of Principle and Propensity examines the attributes of parallel national traditions of spiritual self-formation as they convened under the auspices of the international revival movements: the Evangelical Revival, the Great Awakening, and the renewal of Pietism in Germany, led respectively by John Wesley, Jonathan Edwards, and Count Nikolaus Ludwig Zinzendorf. Further it reveals the ways in which spiritual self-formation and the international revival movements coalesce in the bildungsroman prototype, Johann Wolfgang von Goethe's Wilhelm Meisters Lehrjahre (Wilhelm Meister's Apprenticeship). Part 2 in turn explores the ways these traditions manifest themselves in the nineteenth-century bildungsroman in England and the United States through Jane Eyre, David Copperfield, Pierre, and Portrait of a Lady.

Though Wilhelm Meisters Lehrjahre was a library staple for most serious writers in nineteenth-century England and in the United States, Bennett shows how writers such as Charlotte Brontë, Charles Dickens, Herman Melville, and Henry James also drew on their own religious traditions of self-formation, adding richness and distinction to the received genre.

"The result is a clearly argued and well-detailed book that. . . is sure to invite more discussion of its subject."—Christianity & Literature 66

"Kelsey L. Bennett's Principle and Propensity is an important contribution to our understanding of a central kind of fiction. What she's done, to put it most simply, is to ground five canonical novels about Bildung or self-formation—Goethe's Wilhelm Meister, Charlotte Brontë's Jane Eyre, Dickens's David Copperfield, Melville's Pierre, and James's The Portrait of a Lady—in the eighteenth-century evangelical conversion theologies of Nikolaus Zinzendorf, Jonathan Edwards, and John Wesley. This, plus the equal time she gives to female and male protagonists, makes Principle and Propensity an original and genuinely illuminating work of criticism."—Thomas L. Jeffers, Marquette University

"Kelsey Bennett has written a wonderful book tracing the Bildungroman tradition from well-known European signposts to New World outposts and beyond. She engages the form in a lively conversation bringing together religious and intellectual traditions in a way that allows each to become something bigger than itself alone. Along the way, Principle and Propensity frees not only the Bildungsroman from stereotype, but the novel as a genre, making it OK for the novel to be transcendent and its readers inexhaustible."—Collin Meissner, University of Notre Dame

"I admire everything about [Kelsey Bennett's] book: the vigorous independence of thought, the clarity of the writing, the astuteness of the observations, the awareness of previous research judiciously handled, and the ability to apply a spiritual perspective in a way that makes for fresh and persuasive readings. Few scholars in our time are able to integrate religion in their criticism as a self-evidently vital force (Miriam Elizabeth Burstein is another) that formed the very basis for people's ideas about how to live their lives. The result is exhilarating and enlightening at the same time."—Marianne Thormaehlen, Lund University