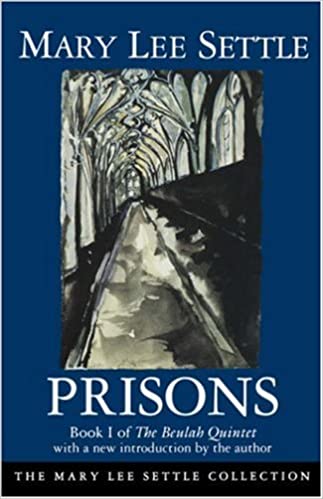 Book I of The Beulah Quintet

Prisons, the first volume of The Beulah Quintet—Mary Lee Settle's unforgettable generational saga about the roots of American culture, classs, and identity and the meaning of fredom—follows the coming-of-age of Johnny Church from English youngster to dashing Oxford adolescent to idealistic Puritan in the service of Cromwell's Parliamentary Army. Throughout his evolution, Johnny seeks emancipation from a multitude of emotional, political, and religious prisons, not realizing that with each successive grasp at freedom, he escapes one form of captivity only to be confined by another.

When Cromwell, the leader Johnny has supported so staunchly, limits the freedoms for which Johnny has taken up arms, he bravely questions the commander. Shortly thereafter he finds himself in a prison of stone and mortar where, as an example to other soldiers tempted to champion their rights, he is executed.

Based on a true incident of the English Civil War, Prisons captures the promise and tragedy of the conflict that led to one of the first substantial migrations to North America and lays the foundation for the next chapter in Settle's riveting saga—O Beulah Land.


Mary Lee Settle was born in Charleston, West Virginia, and has lived in England, Turkey, and New York. Her novel Blood Tie won the National Book Award and her novel Choices received the Lillian Smith Award for fiction. Settle's other works include the novels Charley Bland, Celebration, The Clam Shell, The Love Eaters, The Kiss of Kin and a memoir, All the Brave Promises. Settle now lives in Charlottesville, Virginia.

"A work of truth and beauty—beautifully imagined, beautifully written, beautiful to read... A time of hope and terror is richly re-created, and great characters, real and imaginary, live fully enough to cast shadows and haunt us ever after like family ghosts."—George Garrett