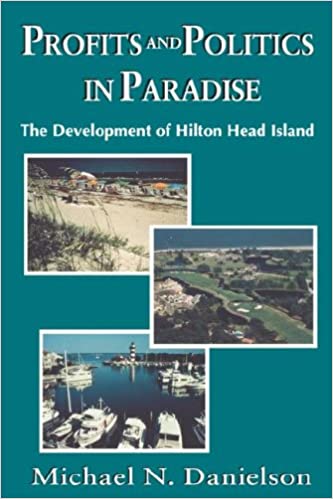 Profits and Politics in Paradise

The Development of Hilton Head Island

A model in resort planning and development

Just north of where the Savannah River flows into the Atlantic lies an idyllic stretch of beach, marsh, and forest known as Hilton Head Island, South Carolina. In the 1950s, Charles Fraser transformed this almost fogotten island into one of America's premier vacation destinations and, in doing so, invented the modern resort and retirement community. In his case study of that archetypal development, Michael N. Danielson explores the interplay of private power and public authority—as well as the dilemmas surrounding growth—in America's recreation-based communities.

Danielson follows the shift in economic power from developers to resort operators and the dilution of political influence from a small group of retired citizens to the island's booming population. Identifying growth as Hilton Head's central political issue, he submits that resorts like it face similar predicaments—the reality that economic expansion alters the very attributes that attracted developers, residents, and vacationers to a locale. Danielson's case study illustrates the impact of growth on th economic and political fortunes of a geographic area, including its devastating effect on Hilton Head's established African-American community residents.


Michael N. Danielson teaches political science and urban development at Princeton University where he is B. C. Forbes Professor of Public Affairs and director of the Center for Domestic and Comparative Policy Studies.