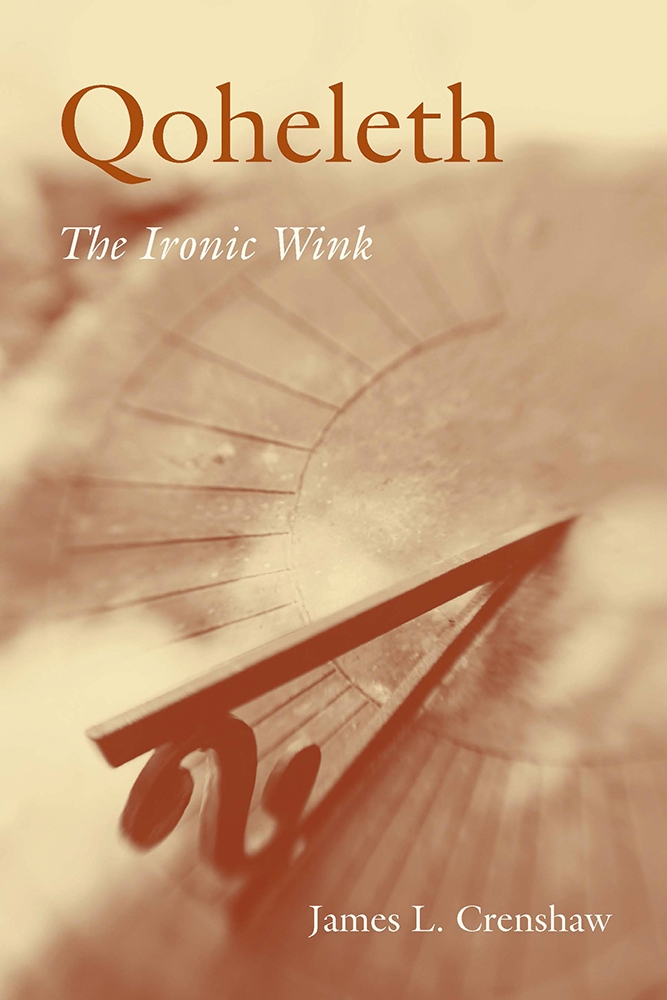 Rarely does a biblical book evoke admiration from a Nobel laureate in literature, a newspaper columnist, a prize-winning poet, and a popular songwriter. Ecclesiastes has done that, and for good reason. Its author, who called himself Qoheleth, stared death in the face and judged all human endeavors to be futile. For Qoheleth observation is the only avenue to understanding; an arbitrarily wrathful and benevolent deity created and rules over the world; and death is unpredictable, absolute, and final. His message is simple: seize the moment, for death awaits.

James L. Crenshaw begins by examining the essential mysteries of the book of Ecclesiastes: the speaker's identity, his emphasis on hidden or contradictory truths, and his argument of the insubstantiality of most things and the ultimate futility of all efforts. Moving from the ancient to the contemporary, Crenshaw again analyzes Qoheleth's observations about the human condition, this time testing if they can stand up against rational inquiry today. In exploring Qoheleth's identity, the foundations of his outlook, and his recommendations, Crenshaw engages modern readers in a conversation about one of the most disagreed upon biblical books.

In Qoheleth, Crenshaw draws on related literature from the ancient Near East and traces the impact of Qoheleth in both Christian and Jewish traditions, summarizing a lifetime of scholarship on the book of Ecclesiastes. While exploring Ecclesiastes and its enigmatic author, Crenshaw engages scholars and modern interpreters in genuine debate over the lasting relevance of Qoheleth's teachings and the place of Ecclesiastes in the biblical canon.


James L. Crenshaw is the Robert L. Flowers Professor Emeritus of Old Testament at Duke University Divinity School and was a Guggenheim fellow in 1984–1985. Crenshaw's most recent books include Reading Job: A Literary and Theological Commentary; The Psalms: An Introduction; Defending God: Biblical Responses to the Problem of Evil; and Prophets, Sages & Poets.

"This lively and thoughtful book grows out of Crenshaw's decades of notable work on biblical Wisdom Literature. Crenshaw is personally engaged with the challenges Qoheleth raises, even offering literary creations of his own in response. The book speaks primarily to a lay audience but has fresh insights that will interest scholars as well."—Michael V. Fox, Halls-Bascom Professor Emeritus in Hebrew

"In this substantive yet accessible volume, Crenshaw brings to life the Bible's strangest sage, highlighting the enigmas of his discourse, the ironic twists of his thought, the elusiveness and relevance of his message, and the power of his intellect. A superb introduction for students and scholars alike."—William P. Brown, William Marcellus McPheeters Professor of Old Testament at Columbia Theological Seminary, Decatur, Georgia

"Qoheleth is one of the most intriguing and enigmatic characters in the Bible. His message that all is futile resonates with the way many people have believed through the ages and up to the present. What are we to make of him and his message? James Crenshaw has devoted years of study to wisdom literature and the book of Ecclesiastes in particular. Now he has crystallized his insights in an accessible and stimulating book that I heartily recommend to all who wrestle with the deep questions of life and faith."—Tremper Longman III, Robert H. Gundry Professor of Biblical Studies, Westmont College