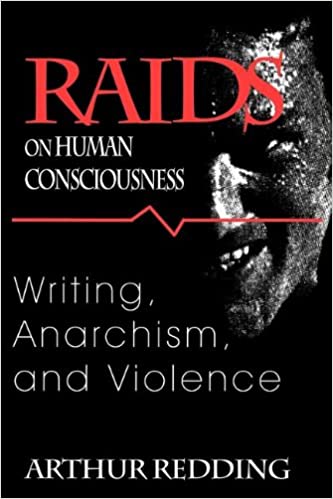 However one looks at violence—as an instrument of bureaucracy or ideology; as a product of racial, gender, or class antagonisms; or as the inevitable result of power politics—it is an integral part of every social system and is one of the most pressing problems of our tortured century.

In Raids on Human Consciousness Arthur Redding examines the contention that violence, be it the mass product of revolutionary uprising or a private sadomasochistic indulgence, may be taken to instill in those who commit it the capacity for radical change.

Conscious that mainstream theory considers violence deviant, a departure from the normal equilibrium of social and aesthetic structures, while other critiques take it to be integral to any dynamic system, Redding begins with the anarchist inquiry into the relationship of violence to the imaginary representation of modern communities. He explores the "public images" of anarchism in literature and popular culture and emphasizes the diverse strategies by which modern writers encounter, derive, deflect, and manipulate fantasies of political violence. The resurgent interest in anarchist thought among the New Left and its implications for contemporary writers become the basis for an extended meditation on the revolutionary or transgressive potential of transformative violence, particularly in the masochistic writings of Kathy Acker.

Redding recognizes that language fails when confronted with the extreme suffering of human bodies. Acknowledging that flesh is subject to war, torture, and everyday brutality—violations to which language can never do justice—he nonetheless finds it urgent to reclaim language on the far side of suffering.

"This book offers a sophisticated, stimulating, and original treatment of the subject of violence and its relation to modernism. The book's chief strength is its theoretically informed and politically savvy analysis of a wide range of scholarly studies from diverse disciplines. The analyses of literary works are perceptive and enlightening in the context of the author's intriguing argument that modernist literature and criticism have become key sites for the expression and examination of types of violence that are no longer effective, meaningful, or widely tolerated in the realm of political action."—Joel D. Black, University of Georgia