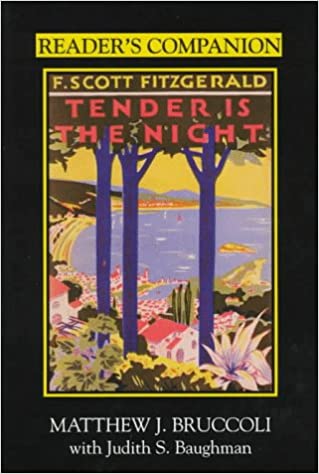 Reader's Companion to F. Scott Fitzgerald's Tender Is the Night

Tender Is the Night, the novel F. Scott Fitzgerald worked longest and hardest on, has not achieved its proper recognition because the text is peppered with errors and chronological inconsistencies. Moreover, the novel has a concentration of references to people, places, and events that most readers no longer recognize. In this guide to the novel, Matthew J. Bruccoli corrects those errors and explains the factual details. He also offers maps, photos, correspondence, and notes that demystify the writing of one of literature's most misunderstood—and underrated—masterpieces.

Bruccoli's substantial introduction reconstructs the composition, publication, and initial reception of the novel Fitzgerald forecast so enthusiastically in 1925. Bruccoli chronicles the novel's varied commencements and Fitzgerald's final approach to the nove. He also addresses key criticisms of the work and refutes the common belief that the novel failed in 1934 because of a critical conspiracy.

Bruccoli takes readers line by line through the text to clarify characters, terms, geography, and chronology and, in making the novel accessible, restores Tender Is the Night to its proper place in the Fitzgerald canon.

Judith S. Baughman is the author of F. Scott Fitzgerald in the Literary Masters series, editor of the 1920s volume in the American Decades series, and coeditor of books about Fitzgerald, Hemingway, and John Hall Wheelock.

"Tender Is the Night is Fitzgerald's most questing, passionate and frightening novel."—James Dickey