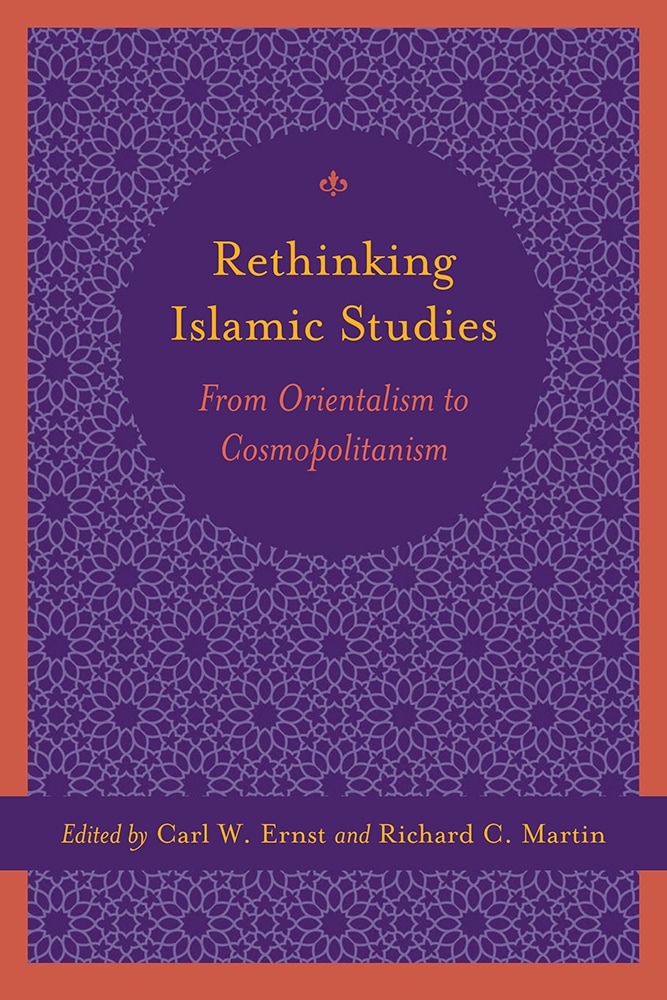 From Orientalism to Cosmopolitanism

Rethinking Islamic Studies upends scholarly roadblocks in post-Orientalist discourse within contemporary Islamic studies and carves fresh inroads toward a robust new understanding of the discipline, one that includes religious studies and other politically infused fields of inquiry.

Editors Carl W. Ernst and Richard C. Martin, along with a distinguished group of scholars, map the trajectory of the study of Islam and offer innovative approaches to the theoretical and methodological frameworks that have traditionally dominated the field. In the volume's first section the contributors reexamine the underlying notions of modernity in the East and West and allow for the possibility of multiple and incongruent modernities. This opens a discussion of fundamentalism as a manifestation of the tensions of modernity in Muslim cultures. The second section addresses the volatile character of Islamic religious identity as expressed in religious and political movements at national and local levels. In the third section, contributors focus on Muslim communities in Asia and examine the formation of religious models and concepts as they appear in this region. This study concludes with an afterword by accomplished Islamic studies scholar Bruce B. Lawrence reflecting on the evolution of this post-Orientalist approach to Islam and placing the volume within existing and emerging scholarship.

Rethinking Islamic Studies offers original perspectives for the discipline, each utilizing the tools of modern academic inquiry, to help illuminate contemporary incarnations of Islam for a growing audience of those invested in a sharper understanding of the Muslim world.


Carl W. Ernst is the William R. Kenan Jr. Distinguished Professor of Religious Studies and director of the Carolina Center for the Study of the Middle East and Muslim Civilizations at the University of North Carolina at Chapel Hill. His previous books include Following Muhammad: Rethinking Islam in the Contemporary World.

Richard C. Martin is a professor of Islamic studies and history of religions at Emory University and president of the American Research Center in Egypt. He is the editor in chief of the Encyclopedia of Islam and the Muslim World and author of Islamic Studies: A History of Religions Approach.

"The essays of this volume have taken up precisely the challenge to redefine Islam apart from both fundamentalists/Islamists and their statist/nationalist opponents. Collectively, the contributors try to project a larger cosmopolitan canopy for Islam beyond the iterations, at once local and ideological, of several Muslim actors."—Bruce B. Lawrence, Nancy and Jeffrey Marcus Humanities Professor of Religion, Duke University, from the Afterword

"Offering a fresh approach to the sophisticated state of contemporary studies on Islam, this collection from some of the best scholars writing today undermines entrenched and outdated views that have previously served to stagnate and distort the fruitful place of Islamic Studies in the broader academic discourse."—Brannon Wheeler, director, Center for Middle East and Islamic Studies, United States Naval Academy

"This is the first sustained and theoretically exciting consideration of the academic study of Islam to appear in a quarter century. The essays explore Islamic approaches to modernity, probe the relevance of new perspectives on religion to Islam and examine Asian Muslim subjectivities in innovative ways. Bookending these chapters are an inviting historiographical introduction by Ernst and Martin and a characteristically searching conclusion by Lawrence highlighting the theme of cosmopolitanism. This is an elegant testimony to the vibrancy of Islamic studies."—Ahmet T. Karamustafa, professor of history and religious studies, Washington University in St. Louis