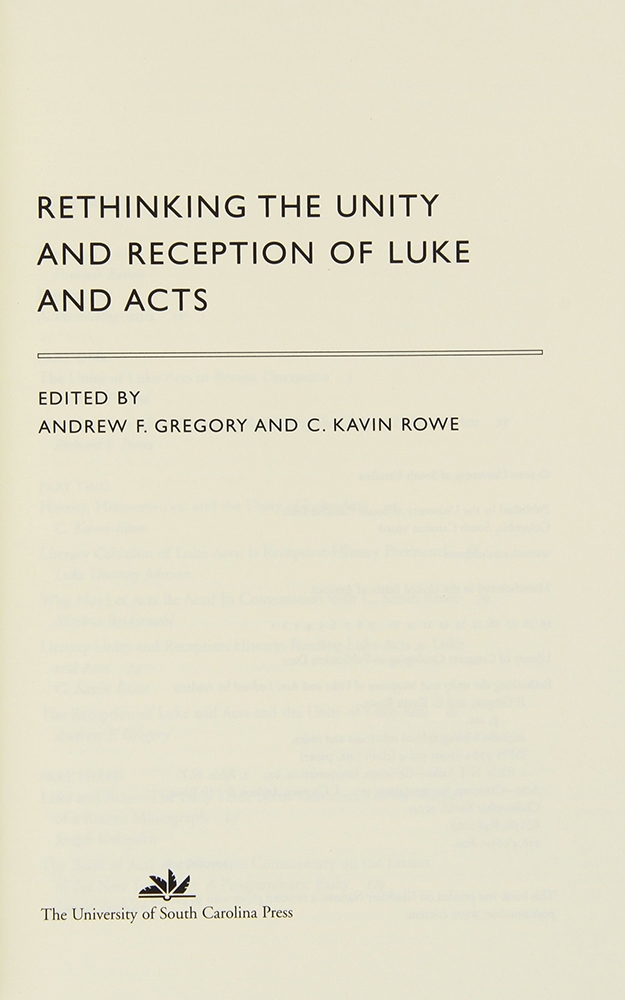 Rethinking the Unity and Reception of Luke and Acts

The unity of the Gospel of Luke and the Acts of the Apostles remains a contested subject in contemporary New Testament studies. Editors Andrew F. Gregory and C. Kavin Rowe—both accomplished voices in the ongoing dialogue about Luke-Acts—are joined by an international cast of scholars to challenge deeply imbedded assumptions central to this debate, to propel the discussion forward in substantive new ways, and to illustrate the importance of relating the exegesis of these texts to the history of their reception. The contributors survey the terrain employing the techniques of historical, hermeneutic, and literary criticism and innovative reception-history research to map the overarching interpretive questions currently facing scholars and students of Lukan studies and to locate opportunities for additional research on these ancient documents.

Rethinking the Unity and Reception of Luke and Acts begins from the viewpoint that scholarly consensus on the single authorship of Luke and Acts is not in itself evidence that the books are two volumes in a single work or that they are intended to be read and understood in tandem. Viewing the books as discrete but interrelated narratives invites discussion by the contributors who examine historical evidence pointing toward a new understanding of how these texts were received and read prior to being entered into the biblical canon. Essays also explore the theological implications to be discerned from the canonical placement and perceived function of the books, and the ways in which Acts can be read as a sequel to all four gospels and as an introduction to Pauline and Catholic epistles.

Gregory, Rowe, and their contributors bring together the best examples of contemporary thinking on the Luke-Acts debate to articulate fully and concisely the challenges in reading the foundational unity of the two Lukan works against the divergent viewpoints found in their reception history. In short, the contributors raise provocative and searching questions both about how Luke and Acts were read before they were included in the canon and how they should be read today. The resulting volume is an exemplar in the methodological usefulness of reception history as an avenue to fresh insights into historical interpretation of the New Testament texts.


Andrew F. Gregory is chaplain and fellow of University College, Oxford. He is the author of The Reception of Luke and Acts in the Period before Irenaeus and coeditor of New Studies in the Synoptic Problem, The New Proclamation Commentary on the Gospels, The Reception of the New Testament in the Apostolic Fathers, and Trajectories through the New Testament and the Apostolic Fathers.

C. Kavin Rowe is an assistant professor of New Testament at Duke University Divinity School. He is the author of Early Narrative Christology: The Lord in the Gospel of Luke and World Upside Down: Reading Acts in the Graeco-Roman Age. In 2009 he was one of twelve scholars worldwide to receive the John Templeton Prize for Theological Promise.