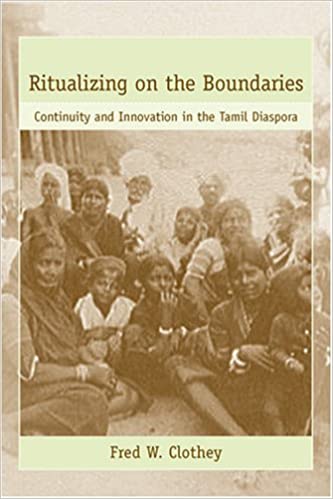 Ritualizing on the Boundaries

Continuity And Innovation in the Tamil Diaspora

For centuries and particularly since the 1830s, Tamils and other South Indians have become part of a diaspora that has scattered their identities and traditions, both real and invented, to cities around the world. In his comparative study of four Tamil resettlements, senior scholar Fred W. Clothey examines the rituals that have traveled with these South Indian communities—Hindu, Muslim, and Christian—and how these practices perpetuate or modify the heritages these groups claim for themselves in their new environs.

Clothey looks specifically at settlements in the cities of Kuala Lumpur, Malaysia; Singapore; Mumbai, India; and Pittsburgh, Pennsylvania. Describing such settlements as communities living on boundaries, Clothey explores how their existence illustrates divisions among ethnic, local, and global identities; between generations; and between imagined pasts and uncertain futures. He contends that one of the most visible ways expatriated communities negotiate these boundaries is through the use of ritual as manifested in the building of shrines and temples, the celebration of festivals, the perpetuation and modification of performances, and the enactment of ceremonies believed to have ancient roots.

In individual chapters Clothey examines the construction of Pittsburgh's Sri Venkateswara temple, one of the oldest and most authentic Hindu temples in the United States; explores the transition from temporary to permanent shrines in Singapore's Hindu community; compares how brahmins in Mumbai and Kuala Lumpur perpetuate subethnic identities in their shrines; and surveys Mumbai's slums to explore the worlds of Muslims, Christians, and castes of Hindus. He also reflects on the meanings of elaborate festivals in each of these cities and speculates about how the singing of hymns links the singers to their perceived lineage as well as to social configurations in their new homes. Such vignettes reveal how rituals serve to affirm a community's sense of heritage while at the same time reflecting their present circumstances. Through these case studies of the Tamil diaspora, Clothey suggests that rituals can create a process of being at home away from home.


Fred W. Clothey, professor emeritus of religious studies, has taught at the University of Pittsburgh for more than thirty years and also served as chair of its Department of Religious Studies. A founder of the Journal of Ritual Studies, he has produced and directed six documentary films on ritual and has written or edited seven books, including Rhythm and Intent: Ritual Studies from South India and The Many Faces of Murukan. Clothey has been a visiting professor at Charles University in Prague, the University of Hyderabad, and West Virginia University. He is the recipient of four Fulbright grants and four fellowships of the American Institute of Indian Studies. Clothey resides in Pittsburgh.

"Fred Clothey provides a window on the twin processes of globalization and diaspora for a single ethnic group, the Tamils, whose forays into world trading networks began in era of the Roman Empire. Ritualizing on the Boundaries brilliantly combines discussion of generations, of family as well as social life, and the uneven effects of globalization on the multilevel Tamil society. Clothey pioneered the study of Tamils in Southeast Asia and now brings his insights together into a single comprehensive volume which will remain important for those concerned with diaspora, ethnic studies, ritual studies, and globalization."—Joanne Punzo Waghorne, professor of religion, Syracuse University

"Fred Clothey brings together over three decades of study of Tamil communities in Pittsburgh, Mumbai, Kuala Lumpur, and Singapore—each having a distinct history of migration, settlement, and identity-formation. For these communities, being Tamil reaches into the repertoires of religious practice; temple construction; and internal social, political, and generational negotiations in pursuit of thriving in two worlds at once: the remembered and imagined Tamilnadu and the cultural context in which they are a minority. Clothey meticulously documents the ways in which religious ritual provides the occasions, performances, and discourses for communities that are at one and the same time 'at home' and 'in the world.' Ritualizing on the Boundaries is an essential work for students of religion, ritual, immigration, South Asian studies, and trans-national cultural studies."—Paul B. Courtright, professor of religion, Emory University